During the five-day expedition the team observed several unusual species, including what is believed to be a stalked ascidian, also known as a sea squirt. © Atlantic Productions.

Marine scientists have long acknowledged the global importance of understanding deep-sea hadal biodiversity for habitat management. So far, however, efforts have been largely focused on shallower waters, typically in the upper 5000 m of the ocean.

In April 2019, the record-breaking Five Deeps Expedition provided a rare and exciting opportunity to apply state-of-the-art technology to observe the biodiversity and geodiversity of these deep-sea environments. A team of marine researchers, led by Alan Jamieson of Newcastle University, made the first crewed descent to the bottom of the Java Trench (also known as the Sunda Trench) – an arc-shaped, deep ocean trench some 3200 km long located in the eastern Indian Ocean, south and west of the islands of Sumatra and Java.

The world’s first — and only — fully certified crewed vessel capable of diving to full ocean depth, the DSV Limiting Factor acquired a video transect from the deepest point of the trench up a near-vertical escarpment in waters more than 7000 m deep. The team, which includes marine researchers from BGS and Newcastle University, recently confirmed their extraordinary discoveries in an open-access paper published in Frontiers in Marine Science.

Applying new technology to the largely unexplored depths of the Indian Ocean produced an extraordinary set of rare and unique discoveries in just five days.

The Java Trench is largely unexplored and it was a unique opportunity to be able to freely explore such complex terrain and observe the distribution of biological species and geological formations that make up these habitats.

One of the least understood of the world’s five oceans, the Indian Ocean is the third largest, spanning 70.56 km2 and accounts for 19.8 per cent of the global ocean volume. 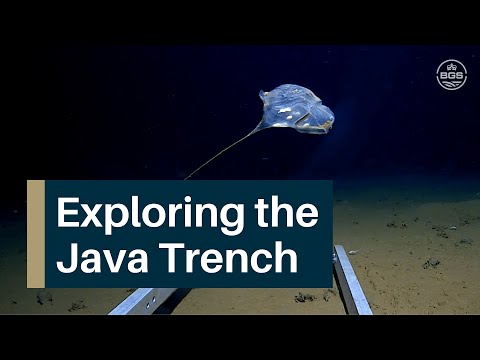 Exploring the Java Trench. Footage courtesy of and © Atlantic Productions.

At 7192 m depth (more than five times the height of Ben Nevis) the team managed to capture some incredible footage of what are thought to be entirely new species from the deepest point of the trench, using the submersible and fleet of autonomous scientific landers. During the five-day expedition they observed new species of hadal snailfish as well as an extraordinary-looking animal believed to be a stalked ascidian, otherwise known as a sea squirt, that by luck drifted past the video camera. The first hadal octopodes were found as well as the deepest larvaceans and decapods were also observed.

Researchers steered the submersible from the soft-sedimented trench axis up a 150 m-high, near-vertical escarpment and across a plateau at a depth of around 7050 m. The exposed rock face of the escarpment hosted areas of debris formed by structural weaknesses in the bedrock eventually failing leaving piles of debris at the base of steep sections. Orange, yellow and white colours pick out these bedrock fractures in a spectacular display of chemosynthetic bacterial communities that live off fluids oozing from the cracks in the rock face.

Ideally we would return and do many more submersible surveys to explore a greater area of sea floor on a variety of geomorphological and geological features. We could then assess how common these chemosynthetic communities are and figure out how important a role they play in the food web at these extreme depths.

We’re very excited by the potential for more studies. Research like this will help to steer the first steps towards more hypothesis-driven and less exploratory-driven science at full ocean depth.

Eventually, this will bridge the gap between this type of observational research and the early taxonomic work completed in the 1950s, to lift the quality of research from the deep water hadal zones closer to that of its shallower counterparts.