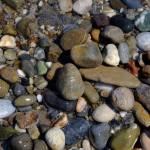 What is a rock?

A rock is a solid collection of minerals. There are three main types of rock, classified by how they are sourced and formed:

Sedimentary rocks are recycled rocks formed by the deposition of fragments of material (sediment) that have been eroded and weathered from other parent rocks. They often consist of sand, pebbles, minerals and mud that’s been removed from the land by erosion, carried by rivers or blown by the wind and eventually deposited.

Sediments are usually deposited in seas and lakes but they can also accumulate in desert environments. They are often deposited in layers known as strata. As the layers accumulate, one on top of another, they become buried underneath younger sediments and they become compressed into solid rock.

Some sedimentary rocks are made from deposits on the sea floor that consist almost entirely of the shell fragments of dead sea creatures. The shells are made largely of calcium carbonate and when they are compressed they form a rock called limestone.

In other cases, the accumulation of large amounts of dead plant material may, over millions of years, turn into coal, which is another type of sedimentary rock.

Igneous rocks are formed by the cooling of a very hot, molten material called magma, which originates deep inside the Earth. There are two categories of igneous rock: extrusive and intrusive.

Magma rises towards the surface of the Earth because it is hotter and lighter than the surrounding rock. It can reach the Earth’s surface through a vent or fissure, when it becomes known as lava. Such an event is known as an extrusion. Due to exposure to air and water it cools quickly and, because of this, the crystals that make it up are usually very small and this is described as fine grained.

Alternatively, the magma may not reach the surface of the Earth and this leads to it cooling very slowly deep below the surface — maybe over thousands or millions of years! This is known as an intrusion. The slow cooling process allows the crystals to become quite large and easily seen. One such rock is granite; it is described as being coarse grained is usually light in colour, with clearly visible mineral crystals.

While granite intrusions did originally cool slowly at depth, uplift, erosion and weathering over millions of years mean that they can be seen on the surface of the Earth today.

Metamorphism literally means ‘change in form’. Rocks that are deeply buried underground can become subject to very high temperatures and intense pressures. Being in these environments for millions of years will change the rocks physically or chemically (or both).

Sometimes, already buried rocks may come in contact with hot igneous material and, without becoming molten themselves, they become ‘baked’ or ‘cooked’; this is known as ‘contact metamorphism’.

A mineral is a naturally occurring substance with distinctive chemical and physical properties, composition and atomic structure.

Rocks are generally made up of two of more minerals, mixed up through geological processes. For example granite is an igneous rock mostly made from different proportions of the minerals quartz, feldspar and mica as interlocked crystals; a sandstone is a sedimentary rock that can also contain quartz, feldspar and mica, but as grains compacted and cemented into each other.

The definition of an economic mineral is broader. Economic minerals are extracted from the Earth by quarrying, mining and pumping and used in a wide range of applications related to construction, manufacturing, agriculture and energy supply. They include:

Visit the MineralsUK website for more information about economic minerals.

Climate is the pattern of weather of an area averaged over many years. We can only show whether climate change has occurred after decades of careful measurements and analysis.