Sinkholes are often saucer-shaped hollows that are the result of some kind of collapse or removal of an underlying layer of rocks that used to support the layer of material at the surface. However, sinkholes can appear in a variety of different shapes and settings depending on the composition of the rocks and different interacting processes.

Research at BGS extends beyond the distribution and processes associated with sinkhole formation to the broader subject of karst, which is the geomorphological term applied to the landscape that results from the dissolution of soluble rocks, e.g. the characteristic limestone pavements of the Pennines.

Some sinkholes result from the removal of a soluble rock such as chalk, gypsum or limestone. These are called solution sinkholes. These rocks dissolve when attacked by rainfall or groundwater that is acidic. Solution sinkholes have sides that vary from gentle slopes to almost vertical, while their shapes include saucer-like hollows, cones, cylindrical potholes and shafts.

Streams or rivers may enter a sinkhole and disappear underground. This type of sinkhole is often called a swallow hole. 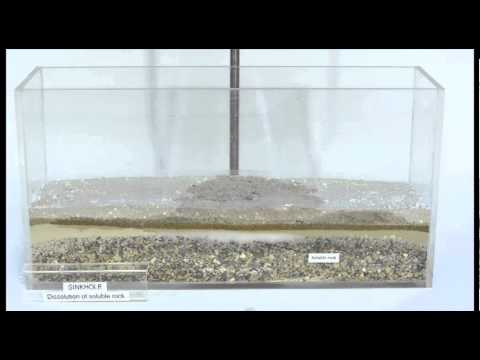 Soluble rocks such as salt, gypsum, chalk and limestone can be dissolved by groundwater on a local scale, causing the collapse of the overlying ground. This collapse is called a sinkhole. In this model, the white area labelled soluble rock is salt. As the water filters down through the rocks above, the salt starts to dissolve and the rocks above drop down to form a sinkhole. BGS ©UKRI.

Although a natural process, the formation of sinkholes is often accelerated or triggered by human influences, such as broken drains, water mains and sewerage pipes, or modified drainage and diverted surface water; these wash sediment into the underlying materials, causing subsidence.

Sinkholes can occur rapidly and apparently without warning. It is therefore important to consider the potential for sinkholes during planning (hazard susceptibility studies) and characterise them so that people can mitigate associated risks.

Several processes can trigger sinkholes. Whilst the process of gradual dissolution can cause a sinkhole to form at the surface, other factors, including human activity, can induce sinkholes to form.

Heavy rain or surface flooding can initiate the collapse of normally stable cavities, especially those developed within superficial deposits.

Leaking drainage pipes, burst water mains, irrigation or even the act of emptying a swimming pool are all documented examples of sinkhole triggers.

Construction and development are also potential triggers. Modifying surface drainage or altering the loads imposed on the ground without adequate support can caused sinkholes to develop.

Drought or groundwater abstraction can cause sinkholes by changing the level of the water table. This removes the buoyant support that groundwater provides to a cavity. Draining these cavities can cause them to collapse.

Mining can be a factor in causing sinkholes, either by dewatering and lowering of the water table, or by intercepting clay-filled voids that subsequently collapse. Several sinkholes in Norwich have been caused by old chalk mines intercepting otherwise stable, sediment-filled voids.

Sinkholes are classified in accordance with their formational processes. The rate at which they form is guided by the size of openings though which fluids flow, the head that is driving the flow system and the geochemistry.  For example, limestone rocks dissolve when attacked by rainfall or groundwater that is acidic.

Solution sinkholes are formed by local chemical weathering of the rock, where water accumulates around a fissure or joint in the rock. This may be underneath the soil or on the ground surface. The hollow that is formed is drained of water through the fissure or joint, but not before it has dissolved some of the rock. The depression gradually gets enlarged.

Collapse sinkholes occur where the gradual collapse of a cave passage occurs and eventually causes subsidence at the surface level. The collapse may gradually propagate up through the overlying strata to cause subsidence at the surface. These sometimes extend up into rocks that are not themselves prone to dissolution, creating a ‘caprock sinkhole’.

Sinkholes formed exclusively this way are quite rare, although many sinkholes are in part formed by collapse: chemical weathering in a solution sinkhole may cause a part of the wall to become unsupported and unstable, resulting in collapse. Sinkholes of this type are common in parts of South Wales, where sandstone rocks overlie cavernous limestone. Others may be buried by more recent deposits.

Collapse sinkhole formation: as the water filters down through the rocks above, the limestone starts to dissolve and the rocks above drop down to form a sinkhole. BGS ©UKRI.

Suffosion sinkholes form where solution of the rock has created a depression on the bedrock surface, under a covering of soil. The unsupported soil subsides into the cavity and leaves a depression in the landscape. These are sometimes referred to as subsidence sinkholes and, in Yorkshire where they are particularly common, they are often known as ‘shake holes’.

If the cover material is sandy, it will tend to gradually slump into the fissures. However, if the material is more cohesive, like clay, then the cavity can grow quite large before suddenly collapsing; this is termed a ‘drop out’ sinkhole. It is these more spectacular collapses (dropout) that sometimes hit the headlines, for example in the area of Ripon in Yorkshire.

The glacial tills of Malham Moor are pockmarked by suffosion sinkholes, between about 1 and 15 m across. Some still have soil and grass on the floor of the sinkhole, but in others the fissured limestone is exposed, the soil having been eroded away by the rain and washed down into the underground river system.

Where does karst occur in the UK?

There are a number of soluble rocks across the UK that form karst. These include Devonian and Carboniferous limestones, Permian and Triassic halite and gypsum, and Jurassic and Cretaceous limestones and chalk.

Where do sinkholes occur in the UK?

Most sinkholes are relatively small or are in upland, rural locations. They include areas underlain by Carboniferous limestone, notably the Mendips, parts of Wales, the Peak District, and the northern Pennines including the Yorkshire Dales.

The most susceptible area in the UK, however, is the Permian gypsum deposits of north-east England, particularly around Ripon and areas underlain by a similar geology. In Ripon, many large sinkholes have developed, some of which have affected property and infrastructure. This is because gypsum is far more soluble than limestone and so dissolves more rapidly.

Sinkholes also occur over salt deposits, commonly in areas such as Cheshire where brine has been extracted, making it difficult to separate naturally formed sinkholes from those created by man.

The Chalk Group is also susceptible and surface lowering of the Chalk is especially evident where it is covered by younger clay and sand deposits (such the ‘Clay-with Flints’ and Palaeogene strata), notably in parts of Dorset, Hampshire and the Chilterns.

In Scotland, sinkholes are generally rare except in parts of Assynt underlain by the Cambrian Durness Limestone.