If we look at the pattern of where earthquakes occur around the world, it is clear that most of the activity is concentrated in a number of distinct earthquake belts; for instance the edge of the Pacific Ocean, or in the middle of the Atlantic Ocean. Over 80 per cent of large earthquakes occur around the edges of the Pacific Ocean, an area known as the ‘Ring of Fire’; this where the Pacific plate is being subducted beneath the surrounding plates. The Ring of Fire is the most seismically and volcanically active zone in the world.

The Earth under our feet has many faults caused by our turbulent geological past. Some of these faults can be observed at the surface and mapped by geologists; others are hidden many kilometres below the surface. These faults are places where earthquakes can occur.

Earthquakes in the UK

Although distant from the nearest plate boundary, the Mid-Atlantic Ridge, earthquakes in the UK occur as crustal stresses within the tectonic plates are relieved by movement occurring on pre-existing fault planes.

The driving forces for earthquake activity in the UK are unclear. They include regional compression caused by motion of the Earth’s tectonic plates and uplift resulting from the melting of the ice sheets that covered many parts of Britain thousands of years ago.

Each year, between 200 and 300 earthquakes are detected and located in the UK by BGS. Between 20 to 30 earthquakes are felt by people each year and a few hundred smaller ones are only recorded by sensitive instruments. Most of these are very small and cause no damage. However, some British earthquakes have caused considerable damage, although nothing like the devastation caused by large earthquakes in other parts of the world.

BGS routinely studies earthquake hazards for engineering projects. This work can influence construction methods and operating procedures for large projects like the Channel Tunnel or for new power stations, for example.

Where do earthquakes occur in the UK?

The largest known British earthquake occurred near the Dogger Bank in 1931, with a magnitude of 6.1. Fortunately, it was 60 miles offshore but was still powerful enough to cause minor damage to buildings on the east coast of England. The most damaging UK earthquake was in the Colchester area in 1884. Some 1200 buildings needed repairs, chimneys collapsed and walls were cracked.

Map of significant earthquakes, greater then magnitude 4, in the UK from 1932– present; Source: BGS©UKRI. All rights reserved. 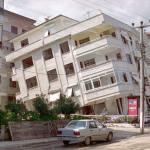 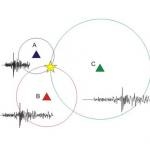 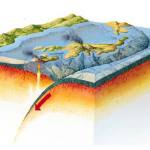