Geoscience visualisation is a fast-growing area and the BGS is one of the world leaders in its application and development. Visualisation systems enable geoscientists to communicate with each other and with end users from diverse disciplines to better understand complex and varied datasets. 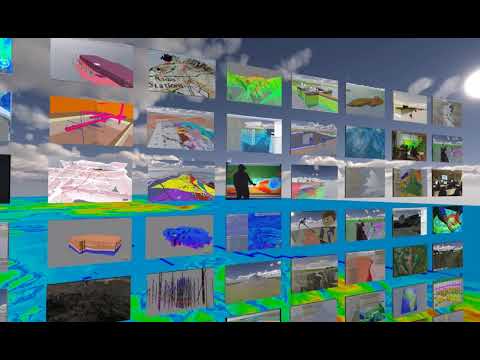 A montage of 3DVS visualisations in GeoVisionary. BGS © UKRI.

3D visualisation provides a mechanism for the communication of BGS science. BGS © UKRI.

We use the latest software and hardware to visualise geoscience data in 3D and provide a mechanism for effective communication of BGS science. By using dedicated 3D visualisation facilities to run software such as GeoVisionary, geological understanding and risk/confidence is more easily conveyed.

The 3DVS team has been involved in a number of high-profile projects such as the UK Geoenergy Observatories.

The BGS is proud to develop GeoVisionary in collaboration with Virtalis Ltd.

GeoVisionary is a world-leading geoscientific information system for visualisation and interpretation of geoscience datasets in a virtual reality environment.

Geoscientists use a wide variety of software to answer specific questions. Each is usually modelled and visualised in its own package. GeoVisionary is the first software to offer the ability to comprehensively visualise all of these elements together in a single, immersive, 3D stereoscopic environment, as well as on desktop PCs and laptops.

We have created an add-in for ArcGIS that links the GIS with GeoVisionary, connecting traditional GIS with the 3D virtual landscape.

The BGS virtual field reconnaissance (VFR) workflow was recently used in cooperation with the Chilean Geological Survey (SERNAGEOMIN) and the Chilean National Mining Company (ENAMI) for geological mapping in a complex area of Andean geology.

This interpretation was taken to the field locations to be verified and augmented by geologists using the BGS digital data capture system (BGS SIGMA), leading to a final geological interpretation and creation of a geological map.

Using GeoVisionary and the BGS VFR workflow means that geologists go into the field with a good understanding of the terrain that they are interpreting. Pre-field interpretation and target prioritisation focus the field effort and increase efficiency; valuable field time is not wasted in areas that could be interpreted with VFR. The result is an improved geological map in less time.

Visualisation and interpretation of regional resources and their properties is important for assessing potential reserves and hazards associated with their extraction and their impact on the environment. The 3DVS team can help bring together hundreds of datasets into GeoVisionary to show relative locations and analyse such things as: 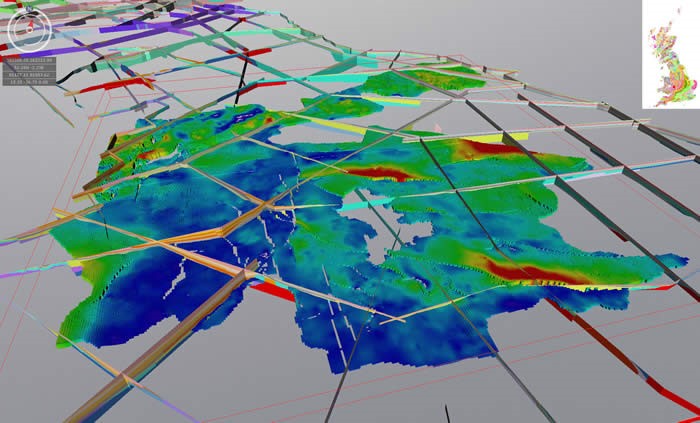 LiDAR laser scans are routinely used to capture the morphology of quarries, cliffs, caves and tunnels along with other geological data to attain very fine-resolution datasets to millimetric precision. These scans can contain a number of points ranging from a few thousand to several billion. The 3DVS team works closely with our laser-scanning experts to help visualise these points in the virtual world.

Figures 1 and 2 show how laser-scanned point clouds have been visualised with GeoVisionary to help monitoring and understanding of coastal erosion. Loading multiple scans allows measurements to be taken between scans from different dates. Stitching together the onshore LiDAR and offshore bathymetry data, both at 1 m spatial resolution, results in a seamless elevation surface. 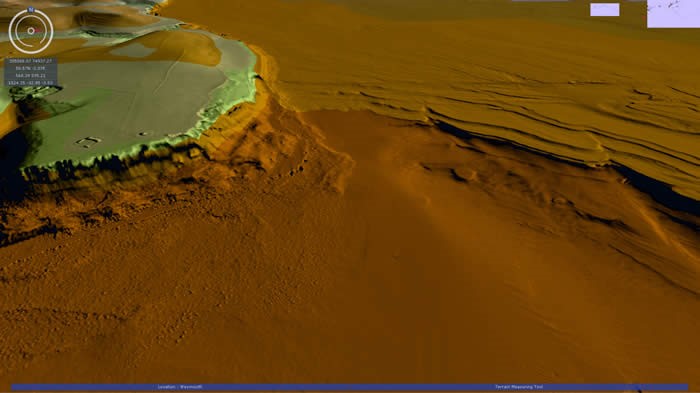 GeoVisionary helps us to understand the geology under our feet, but it is also an important tool for visualising future developments and communicating risk and environmental impact.

3DVS offer training in GeoVisionary, whether via teach-yourself movies or classes of up to 10 at our Keyworth headquarters in Nottinghamshire. We can also deliver training at customers’ own premises or by video link.

For more information, see the BGS GeoSchool, or contact our BGS Learning and Development for course fees, scheduling and availability.

We have a Virtalis ActiveWall single-channel stereographic visualisation system at our headquarters in Keyworth, Nottinghamshire. This system is powered by a PC feeding into a Christie 4K30 projector.

The 3DVS team provides support, training and expertise for the visualisation and analysis of data from GIS and geological models in software such as GeoVisionary, ArcScene, ArcGlobe, Google Earth, NASA World Wind and QT Modeler.

We have installed an augmented sandbox exhibit at our headquarters in Keyworth, Nottinghamshire. Known as the SARndbox, the interactive exhibit was primarily set up for school science events and public open days. However, visitors are welcome to drop anytime during our office opening hours (Monday to Friday 08:00 – 17:30) and have a play.

The SARnbox system runs on a Dell T5610 PC with the Fedora 19 (KDE edition) operating system on an SSD drive. The PC uses an Intel i7 combined with a Geforce 780GTX graphics card and 8Gb of RAM.  On top we are using an Epson EB 4550 central throw projector with an Xbox 360 Kinect. The Kinect acts as the 3D imaging camera/detector.

As you dig around in the sand,  the Kinect is able to detect the changes in the sand’s surface using a laser light and some basic trigonometry. These changes are then fed back to the SARnbox program, which in turn dynamically remaps the surface image to reflect any changes. This is then output via the overhead projector back on to the surface of the sand. The process is repeated 30 times a second.

Using the same dynamic model, the SARndbox can also calculate and project fluid motion over the virtual surface with some very impressive results.

Meanwhile back at Davis University, Oliver continues to develop the SARndbox app with many new and existing features planned for the next release. 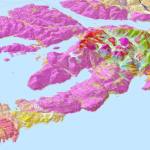 The BGS is a data-rich organisation. Our data science and data infrastructure are fundamental to our future research and underpin our strategic challenges. 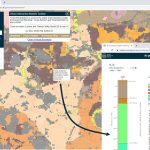 A new tool providing free user access to 3D geological models has been added to the GeoIndex. 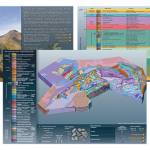 Exploring the world beneath your feet