New seabed surveys show, for the first time, the deepest points of the Indian Ocean and the Southern Ocean. As part of the Five Deeps Expedition team, scientists from Caladan Oceanic LLC and the British Geological Survey have surveyed in detail the deepest reaches of the  Java and South Sandwich trenches.

Prior to the Five Deeps Expedition (FDE) the deepest parts of some oceans were relatively well known, such as Challenger Deep in the Mariana Trench, but others had multiple ‘deeps’ where several contenders challenged for the deepest point in that particular ocean.

Until now, there had been a lack of high-resolution data available for the Indian Ocean and Southern Ocean and there was considerable doubt as to the exact location of the deepest point, let alone accurate depth measurements.

Located just north of the Antarctic continent, the South Sandwich Trench spans both the Southern and Atlantic oceans. It had not been thoroughly explored prior to the FDE mission and is the only subzero hadal zone (deeper than 6000 m) in the world. The FDE survey produced the most accurate mapping of the South Sandwich Trench to date, using a modern multibeam sonar system. The new survey has shown that the deepest point of the trench is Meteor Deep at 8265 m and is located within the waters of the Atlantic Ocean. The recently named Factorian Deep, located at the southern end of the trench, is 7432 m deep. 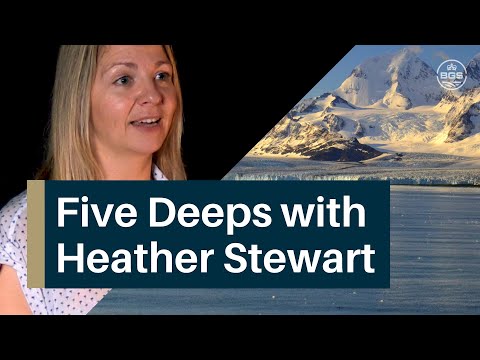 Marine geologist Heather Stewart talks about her experience as part Five Deeps Expedition, which visited all five of the deepest parts of the world’s oceans. BGS © UKRI.

The Java Trench, in the eastern Indian Ocean, is more than 4000 km long. In April 2019, the FDE undertook the first crewed descent to the absolute bottom of the trench (7187 m). This mission also produced the deepest dive by a British citizen, Prof Alan Jamieson, who was also the first British person to descend into the hadal zone. Since then, Prof Jamieson and fellow Brit John Ramsay dived to the deepest points of the Mariana Trench, beating that record, during the FDE.

The submersible DSV Limiting Factor played a crucial role in mapping the deeps. The DSV Limiting Factor and the three supporting free-fall lander systems were fitted with specialist sensors that recorded data during both their descent to the sea floor and their return journey to the ship. These data were used to calculate full-ocean depth sound velocity profiles to correct the multibeam bathymetry data. Many offshore expeditions do not have the time or technology to send these sensors to the sea floor, so rely on sound velocity models rather than direct measurements making this work unique.

The area mapped for the first time during the FDE is roughly equivalent to the size of Finland.

‘The global Five Deeps Expedition allowed us a unique opportunity to accurately map some of the most remote and deepest places in the world, and to validate these depths with measurements collected by the submersible and support landers.

‘Access to state-of-the-art full-ocean depth technology allowed us to map an area equivalent to continental France in only 10 months. Around 61 per cent of where we went had never been mapped using modern technology.’

Cassandra Bongiovanni, chief hydrographic surveyor for the FDE and lead author of the study.

‘Initiatives such as the Five Deeps allows us to fill in knowledge gaps and reveals for the first time the seascape of large underwater features like subduction trenches. Collecting detailed bathymetry data allows us to further understanding into past and current processes, and to explore links between geology and the biodiversity of these ultra-deep environments.’

Heather Stewart, British Geological Survey marine geologist based at the Lyell Centre, Edinburgh, and co-author of the study.

Notes to editors
Full study: High-resolution multibeam sonar bathymetry of the deepest place in each ocean.

Further studies
Prior to the Five Deeps Expedition Heather Stewart and Alan Jamieson reviewed and assessed the best resolution bathymetric datasets and historical expeditions to ask the question: Do we know the deepest places of our oceans?

Full study: The five deeps: the location and depth of the deepest place in each of the world’s oceans.

In 2018, the Five Deeps Expedition (FDE) embarked on a privately funded, year-long, round-the-world expedition to dive a two-person full ocean depth submersible to the deepest point in each of the world’s five oceans (Atlantic, Southern, Indian, Pacific and Arctic). The FDE provided an unprecedented opportunity to contribute to the Seabed 2030 initiative (a collaborative project between the Nippon Foundation and GEBCO) that will bring together all available bathymetric data to produce the definitive map of the world’s ocean floor by 2030.

As part of the overarching mission of the Five Deeps Expedition, and to clarify beyond doubt the deepest point in the Indian, Pacific and Southern oceans, other sites were visited that had been postulated as potential deepest locations.