BGS is pleased to be part of a joint IODP expedition focused on the Arctic Ocean - a key location in global climate change. 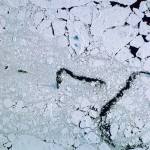 BGS is pleased to be part of a joint expedition of the International Ocean Discovery Program (IODP), focused on the Arctic Ocean – a key location in global climate change.

Despite its global importance, the Arctic Ocean is the last major region on Earth where the long-term climate history remains poorly known.

IODP Expedition 377 Arctic Ocean Paleoceanography – or ArcOP – will represent a step-change in reconstructing the detailed history of climate change in the central Arctic Ocean over the last 50 million years.

A joint expedition, it will involve expertise from the European Consortium for Ocean Research Drilling (ECORD), the Swedish Polar Research Secretariat (SPRS) and Arctic Marine Solutions (AMS) and is planned to take place in August and September 2022.

Science behind the ArcOrp Expedition

The Arctic Ocean is a very sensitive and important region for global climate change, and is unique in comparison to the other oceans on Earth. Due to complex feedback processes (collectively known as “Arctic amplification”), the Arctic is both a contributor to climate change and a region that is most affected by global warming.

Major advances in understanding were achieved in 2004 when the successful completion of IODP Expedition 302: Arctic Coring Expedition – ACEX, also implemented by ECORD, marked the start of a new era in Arctic climate exploration.

The ArcOP expedition will explore a critical time interval, spanning the period when prominent changes in global climate took place during the transition from the early Cenozoic Greenhouse world to the late Cenozoic Icehouse world.

An international team of scientists will collect about 900 m of sediment cores at two sites along the Lomonosov Ridge.

We anticipate that the sedimentary record that the Arc-OP expedition is targeting will provide critical puzzle pieces enabling the scientific community to better understand the drivers, feedbacks, consequences, and varying rates of Cenozoic climate change at both regional and global scales.

A unique and challenging expedition, a fleet composed of a scientific drillship supported by two icebreakers will be used to make drilling possible in this permanently ice-covered region.

Such a multi-vessel approach was employed by ECORD for the first time during the ACEX Expedition in 2004.

The expedition will last for about seven weeks offshore and will be followed by intensive investigation and sampling of the cores onshore to unlock their climate secrets.

BGS will help to lead the implementation of the expedition through its role as the co-ordinator of the ECORD Science Operator (ESO), in close collaboration with SPRS and AMS.

BGS staff are excited to be part of this ambitious IODP expedition that will see us manage, co-ordinate and support an international team of scientists through our role as the coordinator of the ECORD Science Operator.

Our role is very much to support the team’s efforts to uncover and understand the history of climate change in the central Arctic Ocean over the last 50 million years.

We will provide expedition management and coring oversight, and work with our partners to provide facilities and services for the curation, databasing, archiving and analysis of collected cores and samples, and downhole logging services.

Further details of the expedition can be found on the ECORD website.