BGS Earth Observation scientists have a long history (around 20 years) of working with interferometric synthetic aperture radar (InSAR) data. From a key role in the European Space Agency‘s pioneering Terrafirma project, via its spin offs (PanGeo; SubCoast) where early efforts were made at standardising geological outputs, all the way through to the present day where InSAR is routinely used to characterise UK shale gas sites, we have been at the forefront of its use.

Recent recruitment has enabled the team not only to develop the understanding and interpretation of the data but also to help develop algorithms that automatically process the vast amounts of satellite radar data now available and learn from this exciting data all over the world. To complement our in-house expertise, we now coordinate with experts at COMET to drive the development of InSAR techniques relevant to earthquakes and volcanoes.

Deformation monitoring is a key activity of the BGS as surface motion can be a crucial indicator of many natural and anthropogenic processes that can have significant impacts on lives and livelihoods.

The team has been working on characterising mine water rebound processes in the South Wales, Northumberland and Nottinghamshire coalfields. We have also used InSAR for the baseline monitoring of potential shale gas sites in the UK to assess the impact of hydraulic fracturing (‘fracking’) on ground stability.

In addition to work in the UK many of our international projects also use InSAR for geohazard research and monitoring.

The test sites are the Vale of Pickering (North Yorkshire) and the Fylde (Lancashire) in the UK. Hydraulic fracturing has only taken place at Lancashire as it was the only site to also get its hydraulic fracturing plan approved. We have applied different (InSAR) techniques to process archive and current satellite images to detect relative ground motion with millimetric accuracy in rural and semi-urban landcover.

The SBAS, ISBAS and RapidSAR processing for the period from 1992 to 2019 (extending 24 years prior to hydraulic fracturing) identified broad regions with little or no surface motion, along with discrete zones of uplift or subsidence. Analysis of the average velocities and time-series data revealed that the motion, where it occurred, related to factors including compressible ground, groundwater abstraction and underground coal mining. This research concluded that the shale gas operations in Lancashire did not alter the baseline ground motion dynamics to date, as detected by InSAR.

The successful application of InSAR for detecting and monitoring ground motion at shale gas sites in rural landcover in the UK, where radar coherence has traditionally been a major challenge, serves as a precedent for other regions where baseline monitoring is required.

Investigations of mine water rebound

Coal mining and its legacy are one of the most prominent causes of ground motion in the UK. As such it is important to detect, monitor and understand the motion. We have been working with the University of Nottingham and the Coal Authority to understand this issue via the interpretation of InSAR data.

It is evident that active mining leads to subsidence and areas where mines have recently closed undergo uplift (see figures 1A and 1B). These motions are usually in response to groundwater and mine water level changes as the water is pumped out of an active mine and then flows back into a closed mine once the pumps are turned off. We have now built models that predict the amount of motion (uplift or subsidence) for a given geological succession and pumping history.

If we invert these models we can use the InSAR uplift signal to understand the mine water level changes. This has important implications for monitoring the water levels in the mines to ensure it does not reach the surface and cause pollution.

The booming economies of many low- to middle-income nations, coupled with increasing density of people living and working in urban areas, is putting tremendous strain on the natural resources of cities. Intensive groundwater pumping for agricultural activity, industry and supplying the needs of people is depleting groundwater reserves and has led to dramatic levels of subsidence in many cities.

We are measuring this ground subsidence using InSAR in Indonesia (Bandung) and Vietnam (Hanoi) and, together with innovative modelling, we are trying to quantify groundwater extraction rates. This will help us to better understand the long-term sustainability of groundwater aquifers beneath these cities.

We are developing an InSAR processor for the Sentinel-1 radar satellite constellation that is able to automatically download, process and update all the data from this satellite over a specified region. As part of this initiative we are developing automatic methods to classify the InSAR time series into the different patterns of motion and automatically recognise when anomalous motions occur in near-real time. These tools make InSAR more accessible and the information locked within the datasets more useable.

As part of our efforts to provide cutting-edge research, we deploy passive and active radar reflectors to support SAR data processing in vegetated areas that do not show sufficient temporal phase stability otherwise. Some of these radar targets are already installed or are going to be installed soon over the UK Geoenergy Observatories sites and across BGS research facilities such as Hollin Hill and Herstmonceux.

The purpose of the property subsidence assessment dataset is to provide information on ground movement (predominately due to shrink–swell) across Great Britain for the property report and insurance sectors.

The dataset builds upon the GeoSure datasets specifically for shrink–swell hazards with the property report and insurance sectors in mind. It combines the geological understanding of shrink–swell with factors that might augment the severity of the hazard, such as building foundation depth and proximity to trees.

The result is a building-specific hazard score. This hazard score is then adjusted by observed changes in ground motions, which are derived from the InSAR time series; in this way we are able to identify which are the most susceptible properties and then highlight when they are undergoing significant measured motion.

The potential subsidence rates dataset for the UK builds upon the BGS Geology 1:50 000-scale data to offer the maximum rates of motion (mm per year) that a geological deposit could undergo, under ideal conditions, as a result of natural processes. This is the result of joint working between engineering geologists and Earth observation geologists to not only rate how susceptible a lithology is to motion but also to identify a rate of motion from the geological interpretation of InSAR datasets.

This product was originally developed for coastal lowland areas to help understand the link between subsidence and sea level rise, but it is also useful for the property and construction industries.

A new Copernicus Land Monitoring Service is underway to produce a European-wide ground motion service. This ambitious service, funded by the European Environment Agency, will process InSAR data for the whole of Europe to produce a free-to-use, harmonised ground-motion map.

A product such as this requires careful planning, so during the first phase a team are working on the detailed specification. The BGS has been invited to be on the Ground Motion Advisory Board (GMAB), meaning we are part of a European team responsible for reviewing the specification and production plans before they go out to tender.

Once processing is underway the GMAB will also be responsible for the review of the product, its production status and plans for the future. This is a prestigious position for the BGS and has been made possible through 15 years of European Union and European Space Agency work. 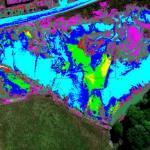 The BGS has extensive experience acquiring and processing hyperspectral data for a range of geological applications.