We have been developing and using drones at the BGS since the mid-1980s. Drones (often called unmanned aerial vehicles or UAVs) provide us with a novel way to capture data; they help us to gain a perspective of the Earth that is simply not possible with instruments that are based on the ground. Compared with conventional aircraft, they can also be a cost-efficient and flexible way to collect airborne data. We have trained drone pilots that are accredited by the Civil Aviation Authority and insured to undertake commercial operations.

We use commercially available drones but we also lead research developing new hardware and software systems. We regularly fly drones in the UK and overseas (e.g. as far afield as Mexico and China). We have a selection of rotary (multi-rotor) and fixed-wing (airplane) drones and a range of sensors including high-resolution cameras, thermal and multispectral sensors, plus novel gas instruments.

We are developing cutting-edge drone technology in a selection of research projects including:

Between 2016 and 2017, the BGS led a project co-funded by an Innovate UK Energy Catalyst grant to examine the technical feasibility of detecting gas using drones. We developed a prototype, cost-effective, small drone gas-detection system for trained operators to take to sites for rapid monitoring. The aim was to fill the gap between time-consuming surface monitoring and costly, conventionally piloted aircraft to identify areas of leaks or fugitive emissions that can then be investigated further and rectified where necessary.

The original methane (CH4)-detecting prototype was co-developed with QuestUAV Ltd using a custom-designed, fixed-wing system. The first test flights took place in 2017, where we successfully detected and quantified CH4 under a controlled release.

More recently in 2018 and 2019, a BGS/NERC Innovation award was used to also develop a carbon dioxide (CO2) drone system using an aircraft and sensor obtained with an ERA GTB grant. The prototype gas-detector plane has been demonstrated at various shows including the Commercial UAV Show (2016), Rushlight (2017) and Innovate (2017 and 2019).

In the current H2020 SECURe project, we are leading the work package focused on the development and application of drones to advance monitoring technologies for gas detection at carbon sequestration and shale gas sites. Our research is also being used at the ERA GTB Sutton Bonington site to evaluate it as a new technology for shallow carbon-sequestration monitoring. 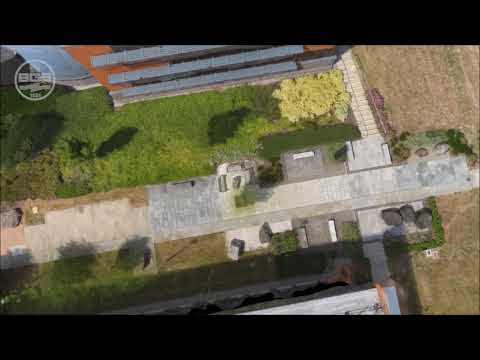 Animation of the Geological Walkway at the BGS Keyworth site made from drone photography. Source: BGS © UKRI

Using high-resolution cameras on drones, we can take overlapping photographs and employ photogrammetry or structure-from-motion (SFM) software to build 3D models. The models on their own can tell us about the form and genesis of a geological feature (such as a sinkhole) while a time-series of models built over time can show us how a feature is developing (e.g. how a landslide is moving) and allow us to monitor how it might affect the environment, such as nearby infrastructure.

We can also join the drone photography into map-corrected mosaics (orthophotographs) that have higher spatial resolution than conventional aerial photography. 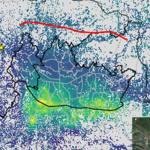 BGS Geodesy and Earth Observation scientists have a long history of working with InSAR data.