Underground storage for renewable energy resources could be a viable green solution as we transition to a net zero UK.

Some renewable energy sources, like wind power, are intermittent and any excess energy can be difficult to store. BGS © UKRI.

The UK has made significant progress already. The share of electricity generated by renewables (principally wind and solar) now stands at 43 per cent, a threefold increase from a decade ago, and coal typically provides less than two per cent of electricity generation: in 2020 there were over 5000 coal-free hours of generation. There is an argument, however, that the hard work starts now, with the difficult-to-decarbonise areas of industry, domestic heating and transport to be addressed. These users of energy will require major changes to their ‘business as usual’ and new technologies that utilise the natural underground asset to store energy will be required to support further decarbonisation efforts.

A well-known issue with some renewable energy sources, including tidal, wind and solar, is that they are intermittent: turbines don’t turn on calm days and solar farms need the sun to generate electricity. Additionally, excess energy produced can be extremely difficult to store for later use. Geology can provide novel ways to store this energy, helping to increase the share of renewable energy sources in the energy market.

The UK is fortunate in that there are naturally occurring beds of halite (rock-salt) — for example, under parts of Cheshire, Teesside, Lancashire and in the North and Irish seas.

Halite is an extremely useful substance. It is soluble and has an extremely low permeability that can contain gas. Large cavities can be developed in beds of halite with an established technique known as solution mining, with the resultant voids used having been used for the storage of natural gas since the 1960s and, on a much smaller scale, the storage of hydrogen since 1972.

Solution-mined caverns can be used to store excess wind and solar energy through the compression of air in them; this is known as compressed air energy storage (CAES). Energy can be stored in this way for longer periods than in traditional batteries. The technology for CAES has been demonstrated at several locations worldwide and we think the geology is suitable in several areas of the UK to support schemes in the UK. When air is compressed, the heat of compression can be stored and used later to heat the air that is released from the cavern to drive turbines to generate electricity.

A particular research area that BGS is working on is the integrity of halite, where gas in caverns may be filled and emptied at faster rates and with greater pressure variations than current natural gas storage operations. This would allow for increased volumes of hydrogen to be stored and used. In particular, the properties of bedded halites, where mudstone and other insoluble material is interbedded with the halite successions, are being investigated.

Hydrogen has the potential to be manufactured without a carbon footprint from a wide range of materials such as natural gas, biomass and some types of waste. Whether produced by electrolysis or steam methane reformation (where the associated carbon dioxide that is produced can be captured and stored), hydrogen can be blended into the existing natural gas network for domestic use, electricity generation, or as a fuel cell in cars and lorries.

The current hydrogen storage option in the subsurface is solution-mined caverns. However, this is limited to regions with halite deposits of suitable depths and thicknesses within which caverns can be developed. As part of the Industrial Decarbonisation Research and Innovation Centre (IDRIC), BGS is researching whether hydrogen storage in porous rocks, such as sandstone, could be viable and under what conditions the natural geology may present a barrier to this type of storage. If storage in porous rocks is a possibility, without loss of quality or amount of the stored gas, then many more regions in the UK without currently obvious subsurface storage options could become potential sites for the hydrogen storage of bedrock, including London, South Wales and central Scotland.

Porous rocks also have the potential to act as a store for heat via so-called aquifer thermal energy storage (ATES). Such thermal stores, where heat is stored in pore fluids, have the potential to capture excess heat produced from industrial processes or homes, which can then be used at locations or times where and when heat is required.

The efficiency of ATES schemes is influenced by the composition of bedrock, structural elements and properties of confining layers. These aspects will be researched by BGS scientists at the UK Geoenergy Observatory in Cheshire as part of an EPSRC-funded research programme. 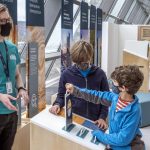 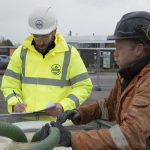