The scientists going underground in search of answers to energy storage

Finding answers to some of our planet’s biggest challenges can require scientists to carry out their work in the most extraordinary of environments. 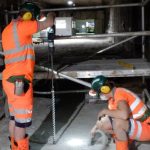 In the UK’s deepest mine, situated between Saltburn and Whitby on the north-east coast of England, ICL Boulby hosts the Science and Technology Facilities Council (STFC) Boulby Underground Laboratory. The laboratory sits within thick rock-salt (halite) deposits in the mine left behind from the evaporation of the ancient Zechstein Sea some 250 million years ago. The mine contains a network of roadways and caverns, with over 1000 km of tunnel, excavated during mining operations that began in 1968. It’s now one of the few places that halite can be studied at depth.

It’s in this busy, working rock-salt and polyhalite mine that BGS scientists have been going underground into a hidden laboratory. Being situated in an active mine, the team must wear an outfit consisting of high-visibility t-shirts, shorts and even shin pads before they can begin their research. It’s a journey so far down, you’ll need a lift to take you there.

Our experts are working with staff from the mine and Boulby Underground Laboratory to design a research programme to help understand the behavior of rock-salt. Caverns formed in halite by solution mining can be used to store excess energy generated from wind and solar in the form of compressed air or hydrogen. One of the main benefits of this is that the technology allows a greater amount of renewable energy to be used in a flexible way, which many think will be essential for the UK to achieve its net zero ambitions. However, the way the caverns form can lead to a loss of operational efficiency. This research will help in the optimisation of cavern design whilst also making the most efficient use of the unique halite resources in the UK.

The importance of salt caverns for energy storage

It is a well-known fact that some renewable energy sources, such as wind and solar, are intermittent. Little energy is produced on days without sunshine or wind. This is in contrast to fossil fuels or nuclear energy, which can produce energy all year round. On days when we can use both fossil fuels and other energy sources, there is the potential for surplus energy to be created. Therefore, having ways to store surplus energy will be vital to fill potential gaps in the energy supply as the UK moves away from fossil fuel energy sources.

Energy storage can take the form of compressed of air in ‘compressed air energy storage’ (CAES) or by the production of hydrogen via electrolysis: both gases can be stored in solution-mined caverns developed in halite. Storing gases within caverns requires a detailed understanding of a number of parameters associated with cavern operation, including variations in terms of geology and in situ conditions such as temperature and stress.

Halite is an ideal material to host storage caverns:

Having an understanding of the processes that influence cavern formation and the way in which caverns may evolve over time is relevant to enable increased capacity of energy storage in the UK.

BGS is carrying out a number of tests on the rocks exposed at Boulby to understand the controls on the formation of solution-mined caverns. These tests have initially begun at a small scale, allowing them to be tied into laboratory studies taking place at BGS. To date, this has involved creating small-scale voids at the base of a number of boreholes (1–2 m in depth) and varying the injection point and the salinity of the fluid used to dissolve the halite.

The aim of these studies is to understand how fluid chemistry and the location of the injection tube within the borehole may affect the shape of a cavern. A resin was poured into these small boreholes and voids, meaning a mould of the borehole could be taken. These moulds have been excavated and studied in three dimensions back in the BGS laboratories. A series of laser scans have also taken place in order to begin to analyse the effect of fluid salinity on cavern shape.

BGS plans to build on this work to study the processes involved in cavern formation and pressurisation at a larger scale, potentially up to several metres.

STFC have recently purchased a laser-scanning device that will enable BGS scientists to scan the caverns and voids that they develop. Being able to analyse the shapes and volumes of the caverns and how cavern morphology may change in time will be vital to understanding the nature of salt dissolution and also how rock stresses may alter cavern shape over time.

The research will help to answer important questions that can help in the cavern design process:

These are all questions which, if answered, would help to improve the understanding of the ways caverns form and therefore would result in more well-formed caverns and increased industry efficiency.

Research so far has studied the degree of dissolution that occurs for different salinity injection fluids. Furthermore, a clear link has been shown between the salinity of the injection fluid and the surface roughness of the cavern walls; a low salinity fluid creates a larger cavern, although it has a rougher surface wall.

Whilst industry-scale salt caverns are much larger than the tests being carried out at Boulby, the caverns that scientists are looking to form at Boulby will only be small scale to begin with; around 10–15 m under the surface of the mine floor and potentially up to 5 m in length. These caverns are able to start answering several complex research questions. However, the success of the initial research means the scientists hope to secure funding to be able to upscale this work over the coming months and years to form a larger-scale testbed.

Scientists know that enhancing their understanding around the size and spacing of caverns is relevant to the safety of cavern storage schemes. If caverns are too large and too close together, they may interact with each other and become unsafe; too far apart and sites become much larger and more expensive to develop. It’s important to carry out thorough research at relevant scales to understand this.

The Boulby Underground Laboratory is run by the STFC, part of UK Research and Innovation (UKRI). The STFC, along with ICL-UK, have been hosting underground science at Boulby since the 1990s.

Described as a ‘special place for science’, STFC emphasises that the facility is home to a fascinating array of science projects from astrophysics, including the search for dark matter, to ultra-low background material screening, studies of geology and geophysics, climate, the environment, life in extreme environments on Earth and beyond.

For the team at BGS, carrying out tests of this nature at a depth of over a kilometre within the mine is entirely novel and does not come without its challenges.

At 1100 m depth, the team is sometimes working in baking temperatures of up to 35oC. Working among salt deposits can also make for an extremely dry environment. Since it takes around seven minutes to travel to the bottom of the mine, transporting equipment is an interesting challenge that must be carefully planned and coordinated with other projects being carried out in the mine. Researchers are expected to wear protective shin pads and hard hats, carry torches and an emergency device that can convert poisonous carbon monoxide into breathable carbon dioxide for enough time to escape to a safe area. Mine-drilling teams and geologists must work closely together to ensure safety at all times.

The importance of Boulby Underground Laboratory

Boulby Mine is special in the UK as it allows the Permian bedded halites of the eastern UK to be accessed and experiments to be run in situ. The research is relevant to understanding one of the main potential areas for cavern development in the UK and importantly extends beneath parts of the North Sea.

Being able to access the Boulby site means we have direct access to the in situ rock at depth and can perform experiments at a range of scales. This would only normally be accessible using rock core, where we would only get a very small amount of material. Furthermore, the field tests can be carried out at relevant stresses and temperatures due to the depth of the mine.

The extent of the mine also means it may be possible to study the spatial variability in the properties of the salt.

This project is currently funded by internal BGS funding.