New research has thrown fresh light on what scientists understand about the role of karst in the Chalk aquifer, which provides public water supplies to millions of people, agriculture and industry, and sustains vital habitats. 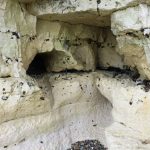 New research has thrown fresh light on what scientists understand about the role of karst in the Chalk Group aquifer, which provides public water supplies to millions of people, agriculture and industry, and sustains vital habitats. A study led by BGS, published in the Geological Society of London Special Publication SP517, The Chalk Aquifers of Europe, has compiled evidence showing that karst and rapid groundwater flow are much more widespread in the Chalk than previously thought.

The study will be of particular interest for regulators and water companies, both globally and in the UK, when planning future approaches to groundwater source protection and catchment management. Existing research shows that globally, around 20 to 25 per cent of people rely on karst groundwater for supply.

‘Karst’ is a geomorphological term that is applied to a type of landscape where erosion caused by dissolution, in other words the dissolving of bedrock, has resulted in fissures, sinkholes, sinking streams, ridges, caves, springs and other characteristic features. It is typically associated with soluble rock types such as limestone, marble and gypsum.

The Chalk is an unusual karst aquifer with limited cave development, but extensive networks of smaller solutional conduits and fissures that enable rapid groundwater flow. Small-scale karst features such as dolines, stream sinks, dissolution pipes and springs, are common.

This research is the culmination of many years work and is a step forward in our understanding of the Chalk aquifer. Our research presents evidence of the extent of karst in the Chalk throughout England, including almost 100 tracer connections demonstrating rapid groundwater flow.

We demonstrate that rapid groundwater flow and karst occur much more frequently than previously thought, which provides an important step forwards in our conceptual understanding of the Chalk and of global karst aquifers more generally.

Improved understanding of Chalk karst will expand understanding of similar karst aquifers with limited cave development that are globally widespread and provide vital public water resources to millions of people.

Such insights into the unique nature of Chalk karst may also help to advance understanding of classical karst aquifers, where major caves are often the main focus of research and fissures or smaller conduits are less understood.

The full study is titled Karst hydrogeology of the Chalk and implications for groundwater protection. The work is funded by the NERC knowledge Exchange fellowship scheme.

Other work in the Geological Society of London special publication also highlights the importance of karst in the Chalk, including a further BGS-led study, The genesis and evolution of karstic conduit systems in the Chalk.