Evaluating contamination in sediment, waters and fish from two contrasting catchments in England

Calum Ramage's PhD project sets out to assess the impacts of pesticides and trace metals on British rivers. 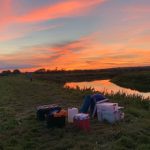 A beautiful end of a long day of fish sampling on the River Tone. © Calum Ramage.

As the natural drains that flow through our cities and countryside, rivers are at the receiving end of our household, industrial and agricultural waste. Many of the chemicals now ubiquitous in our aquatic environments, such as trace metals and agrochemicals, can bioaccumulate in aquatic wildlife and cause a wide variety of health issues such as neurotoxicity, endocrine disruption, genotoxicity and immunosuppression. All these issues can affect the survival of individuals and populations throughout the food, or trophic, web and therefore have the potential to threaten the delicate ecological balance within our rivers.

In the UK, our reliance on agrochemicals is of especially great concern to river health. More crops are being treated with pesticides than ever before and increasingly often. Treatments regularly contain harmful mixtures of pesticides that, when combined, can cause a ‘cocktail’ effect. Despite an increase in the number of chemicals being regularly monitored in river water, we are far from understanding the full ecological and ecotoxicological impacts of these contaminants on our freshwater ecosystems.

A PhD project, led by Calum Ramage and his team of supervisors from the University of Nottingham (L Yon, M Johnson and L Bailey) and BGS (Christopher Vane and Raquel Lopes dos Santos), has set out to assess the impacts of pesticides and trace metals on British rivers and on the health of their aquatic inhabitants. At BGS, targeted pesticide screening methods will be used to detect and quantify a wide range of current-use pesticides in the waters, sediments and biota of two of our rivers: the River Tone in Somerset and the River Wensum in Norfolk. At the University of Nottingham, work will focus on trace metal analyses and effect-based monitoring methods, using wild fish as bioindicators of aquatic health.

After a challenging year and a half spent heavily adapting the PhD project, which was originally due to take place in Kruger National Park, South Africa, fieldwork in the UK finally commenced in autumn 2021. Various sediment sampling equipment was first tested on the Tone during a scoping visit to work out the most suitable sampling method. This was quickly followed by two very long and challenging days of fish sampling in early October, then two weekends of environmental sampling in which surface water and surface sediments were collected from across both river catchments. While sampling English rivers may not have matched the excitement of South African fieldwork, the additional peace of mind felt when wading into non crocodile-or hippo-infested waters did partially make up for it!

Now that the first batch of samples are in, the next few months will be spent processing, extracting and analysing the water, sediment and biotic samples by LC-MS/MS for the presence and distribution of pesticides in the two rivers, as well as for their bioaccumulation in invertebrates and fish. An in-depth fish health assessment, using a range of biochemical and histopathological assays, will also be completed to provide an impact assessment of pollutants in both rivers.

I was born and raised in rural France on the Swiss border and have always been drawn to nature and wildlife. My passion for the natural world led to me studying biological sciences at University College London and the University of Western Australia, before leaving to work on conservation and island restoration projects in South Africa and Mauritius. I was then drawn back to the UK by this multidisciplinary PhD project, which links environmental and wildlife health to anthropogenic activities.