£0.15 per km2. Subject to number of users, licence fee and data preparation fee.

Ground dissolution occurs when water passing through soluble rocks produces underground cavities and cave systems. These cavities reduce support to the ground above and can cause localised collapse of the overlying rocks and deposits.

The three common rocks that dissolve are rock-salt (halite), gypsum and limestone (including chalk). Dissolution of these rocks produces caves, sinkholes, sinking streams and large springs, creating a landscape known as karst.

Rock-salt is extremely soluble and has usually been removed from the near-surface zone by natural dissolution. Gypsum is highly soluble and can cause potential problems if it dissolves. Limestone is moderately soluble and is removed over a longer time scale, but contains significant cavities.

Although rare, cavities created by dissolution of soluble rocks can collapse, resulting in subsidence of the land above. More commonly, changes in ground- or surface-water flow can flush out existing sediment-filled fissures, sinkholes and caves, leading to subsidence. This causes the formation of circular cylindrical or conical depressions at the ground surface known variously as sinkholes, swallow holes, shake holes or dolines. However, with appropriate precautions, these hazards can usually be mitigated.

Subsidence caused by sinkhole formation can cause structural damage. Properties affected by dissolution may experience a range of problems including:

The potential for dissolution to be a hazard has been assessed using 1:50 000-scale digital maps of superficial and bedrock deposits. These have been combined with information from the BGS superficial thickness dataset as well as scientific and engineering reports. The detailed digital data illustrated in the map is available as attributed vector polygons, as raster grids and in spreadsheet format. 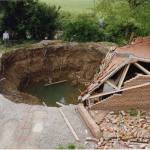 If subsidence appears to be happening on or near your property, inform your insurance company, mortgage lender or landlord and seek specialist advice.