£0.3 per km2 as part of BGS GeoSure Landslides bundle

The term ‘debris flow’ refers to the rapid, downslope flow of poorly sorted debris mixed with water. These flows are a widespread phenomenon in mountainous terrain and are distinct from other types of landslides as they can occur periodically on established paths, usually gullies and first- or second-order drainage channels.

Debris flows in Great Britain are most commonly found in upland Scotland but also occur in parts of Wales and the Lake District. Find out more about how landslides are classified.

Debris flows are potentially very destructive and, due to the speed at which they take place, can for example rapidly block infrastructure routes such as the Rest and Be Thankful Pass and Glen Ogle.

GeoSure ground stability data consist of six data layers in GIS format that identify areas of potential hazard in Great Britain. One of these six layers, GeoSure landslides, best simulates shallow translational and rotational landslide types. In order to incorporate another damaging landslide type common in upland Britain (debris flows), the BGS Debris Flow Susceptibility Model (DFSM) has been created. Interest in expanding the BGS GeoSure capability to include debris flows primarily arose following a series of debris flows that affected main roads in Scotland in 2004.  These events led to the commissioning of the Scottish Road Network Landslides Study by the Scottish Executive (Winter et al., 2008). This review assessed the slopes adjacent to the trunk road network and identified areas that had the greatest potential for similar debris flow events in the future. The DFSM builds on research BGS has conducted over the past 15 years investigating debris flows.

The DFSM is provided as an add-on to the GeoSure Landslides dataset. This is a product enhancement and is provided at no additional cost. 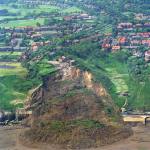 The potential for landsliding (slope instability) to be a hazard has been assessed using 1:50 000 scale digital maps of superficial and bedrock deposits. These have been combined with information from the BGS National Landslide Database and scientific and engineering reports.