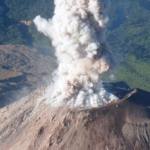 Guatemala is exposed to multiple natural hazards, including earthquakes, volcanic eruptions (and all their associated hazards, such as ash, lava flows, pyroclastic density currents and lahars), tsunamis, landslides, floods, droughts, ground collapse, tropical storms and hurricanes, extreme temperatures, and forest fires. The impacts of these hazards threaten economic growth, lives and livelihoods. The World Risk Index (2017) ranked Guatemala fourth globally in terms of the risk of becoming a disaster victim due to an extreme natural event.

Natural hazards (in Guatemala, and elsewhere) do not always occur independently, and there can be interactions between natural hazards. One hazard may trigger multiple secondary hazards, which can subsequently trigger further hazards. For example, in Guatemala, regular eruptions of the volcano Santiaguito (pictured) result in large volumes of volcanic debris. This debris can be mobilised as lahars, and enter the hydrological system, triggering erosion and flooding, with the potential to damage important infrastructure.

Through the BGS Innovation Flexible Fund, Joel recently travelled back to Guatemala to share this work and discuss with partners how government agencies responsible for hazard monitoring and disaster reduction could use frameworks of hazard interactions. An important step in the research process, and an ethical responsibility for scientists, is communicating and sharing our work with stakeholders, including those who have contributed to the research and those who may benefit from its results.

During his visit, Joel presented the hazard interaction frameworks in Guatemala through seminars, workshops and meetings at universities, the National Institute of Seismology, Volcanology, Meteorology and Hydrology (INSIVUMEH), the National Coordinator for Disaster Reduction (CONRED), and the Guatemalan branch of the UN Office for the Coordination of Humanitarian Affairs.

Multiple partners identified the value of Joel’s frameworks as reference tools in both disaster response and preparedness. For example, some participants noted their use in informing public communications regarding potential secondary hazards after a primary hazard. Others observed interactions in the matrix that they had not previously considered, but they acknowledged could occur and that they could integrate into their planning. All partners agreed that a priority next step would be developing tools that inform municipal level planning and preparedness.

Joel finished his time in Guatemala by meeting the British ambassadors to Guatemala and Honduras, sharing the results of the meetings, and discussing disaster risk reduction in the region. Everyone agreed that there is significant scope for future collaboration between hazard scientists and disaster professionals in the UK and Guatemala.