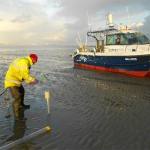 Parts of the River Thames previously thought to be relatively unaffected by Britain’s historic use of organic contaminants and metals are more polluted than first thought, according to new research.

A study of Chiswick Ait shows the sediments of the River Thames contain appreciable amounts of heavy (trace) metals that are potentially toxic to biota and humans; other river islands could be housing similar levels.

Dating of the sediments revealed that chlorinated organic contaminants such as polychlorinated biphenyls (PCBs) and toxic metals show a rise, peak and fall, which reflects the UK’s and London’s use and release from the 1950s to the 1980s.

In what is believed to be the first ever geochemical assessment of London’s mud islands, experts from the BGS studied sediment contained in the top 60 centimetres of Chiswick Ait.

The study of the ait, an uninhabited, ship-shaped island in the Borough of Hounslow, shows that tidal mud islands (aits) in the River Thames are acting like a ‘sink’ for toxic contaminants, which have been buried since the peak of the city’s industrial era in the 1950s. More frequent episodes of heavy rainfall and flooding have the potential to unlock these harmful contaminants, posing a risk to health and damaging marine biota, according to the study.

“Historic protected islands like Chiswick Ait, which is formed of clay-silt, have steadily accumulated polluted sediment and showcase a higher resolution of contaminants than some of their foreshore or channel counterparts,” explains Dr Chris Vane, Head of Organic Geochemistry at the BGS, who led the study.

“Accelerating global climate change effects may drive an increase in the intensity and frequency of flooding which mobilises buried legacy contamination and has the potential to transport it from the river back to land.

“These are pollutants which are potentially harmful to the marine environment and to humans.

“We suggest that London’s river islands are not unique in this respect and that other regularly flooded urban river islands in the UK may be acting as a similar sink for pollutants.”

The most downstream of the Thames’ river islands, Chiswick Ait is one of ten remaining medieval mud islands in the Thames. As well as featuring each year in the world-famous Oxford vs Cambridge Boat Race, it is ecologically important because it houses a variety of wildlife and trees dating back to the Middle Ages.

Despite this, it is known by scientists to deposit silt and clay sediment, as well as plastic waste, several times each month. Using collected samples, scientists were able to analyse the sediment and trace a history of contamination at the ait over about 80 years.

The team found similar patterns when looking at polychlorinated biphenyls, otherwise known as PCBs. Used in a vast range of commercial products from electrical apparatus to paints and coolants, their manufacture and use were limited in the 1980s due to growing concerns over their toxicity.

Dr Vane says: “These findings support earlier reports which suggest that levels of sediment pollution in the tidal Thames are decreasing, probably as a result of improved legislation, treatment procedures and river management. Despite this, concentrations of heavy metals vary considerably depending on depth, and at certain levels frequently exceed sediment quality guidelines.

“What we’re looking at is the ability of tidal Thames sediment to host and act as a long-term reservoir for persistent organic contaminants well above background, and this is only likely to increase with climate change pressures.”

According to the study, Chiswick Ait is predominantly subject to erosion from increased flooding between November and March and by waves caused by increased river traffic on its north-eastern bank.

The full study has been published by the Royal Society of Chemistry in Environmental Science, Process and Impacts.