Much of the world’s population faces a threat to the quality and availability of their drinking water. 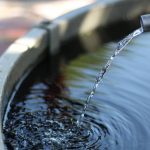 More than half of the world’s population faces a looming threat to the quality and availability of their drinking water because climate change and urbanisation are expected to cause an increase in groundwater organic carbon, a new study has found.

The research, a collaboration led by the University of New South Wales (UNSW) and four major research institutions including BGS, examined the largest global dataset of 9404 published and unpublished groundwater dissolved organic carbon (DOC) concentrations from aquifers in 32 countries across six continents.

DOC is a naturally occurring component of groundwater, but the higher its concentration, the more difficult and expensive it is to make groundwater drinkable.

Scientists say the study forecast elevated DOC concentrations because of projected changes in temperature and rainfall rates due to climate change, as well as increased urbanisation.

“We identified groundwater DOC concentration increases of up to 45 per cent, largely because of increased temperatures in the wettest quarter of the year, for example in a number of south-eastern states in the United States.

“We predict increases in DOC in these locations could increase water costs for a family of four by US$134 per year” Dr McDonough said.

“Other areas such as eastern China, India and parts of Africa already experience severe groundwater contamination issues. By 2050, these may be further compounded, particularly in south-eastern China, by groundwater DOC increases associated with large predicted increases in temperature in the wettest quarter of the year.”

Professor Daren Gooddy, a groundwater specialist from the BGS based in Wallingford, says:

“Compared with agriculture or natural land use, our research suggests urbanisation will increase groundwater DOC concentrations by nearly 20% most likely due to contamination from leaking sewer and waste disposal systems.

“This is likely to result in a rise in the cost of water treatment, even in the UK, as potentially more pollutants are mobilised into our valuable groundwater resources.”

The scientists revealed that increased groundwater DOC, whether natural or due to contamination, also posed a threat to human health.

Groundwater provides essential drinking water for more than 50 per cent of the world’s population.

While DOC is a naturally occurring, key element of groundwater, it may combine with and transport potentially dangerous heavy metals otherwise bound to rocks and sediment where groundwater occurs.

“Many of the health impacts are caused by the interaction of DOC with chemicals in the water treatment chlorination process leading to the formation of by-products called trihalomethanes or THM’s. Most countries set no boundaries on the allowable concentrations of DOC and generally, the higher the DOC content, the greater the amount of THM’s formed,” Professor Gooddy explains.

“This is a concern since, for example, 1 in 20 cases of bladder cancer in the UK are linked to these THM’s.”

An increase in groundwater DOC concentration impacts the ability and therefore cost to make groundwater drinkable.

The scientists projected a 16 per cent increase in annual household water costs in some parts of the United States because of rising water treatment costs, due to the need to implement additional water treatment measures to remove increased DOC concentrations.

“This level of increased costs are likely be mirrored elsewhere in the world,” says Professor Gooddy.

“What this study also shows is that a decrease in groundwater quality and substantial increase in water treatment costs may also compound existing constraints on groundwater resources, including availability.”

The impacts on groundwater DOC levels from climate change and urbanisation, while likely to occur globally, differ by geography and climate.

“Our next step is to investigate how the character of DOC changes when you have different aquifer minerals, because some types of organic matter can stick to certain mineral surfaces and ultimately reduce this type of organic matter remaining in the water,” adds Dr McDonough.

“This will help provide guidance on the most suitable water treatment options in areas where DOC concentrations are expected to increase.”

The following are available for telephone or Zoom / video link interview: