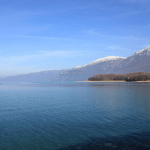 Mud taken from deep within Europe’s oldest lake is helping scientists understand how Mediterranean rainfall has varied over the past 1.4 million years and how it could change in the future.

While scientists have been able to predict Europe’s long-term future temperature increases, the picture of winter rainfall has been less certain due to a lack of data.

Winter rainfall is important for the region as it offsets summer drought and controls the amount of water available to meet agricultural, domestic, and industrial demand.

Now, a 570 m column of mud from Lake Ohrid in North Macedonia is giving scientists access to 1.4 million years of Mediterranean rainfall data, as reported in Nature today.

The mud was extracted from Lake Ohrid during an International Continental Scientific Drilling Program (ICDP) project, which involved scientists from around the world.

Dr Jack Lacey, a geochemist from BGS, has used chemical data from the mud to understand past changes in rainfall.

The sediment from Lake Ohrid has allowed us to unravel an extended climate history for the Mediterranean region in exquisite detail. Until now we could rarely go back beyond around 10 000 years.

At BGS we investigated the chemistry of the mud that built up at the bottom of the lake, measuring the oxygen and carbon chemistry of minerals, which is mainly controlled by how wet the climate was. The consecutive layers tell us about the evolution of climate over time.

Overall the mud shows recurring periods of higher rainfall that tended to occur during hotter periods when the Earth suffered higher atmospheric levels of CO2. These periods were also marked by less polar ice, and large seasonal differences in the amount of sunlight reaching Earth’s surface.

We found a strong connection between Mediterranean winter rainfall and African summer monsoon strength throughout our record.

This means that not only is solar energy a key driver of the African monsoon, but also has a dominant control on rainfall variability in the Mediterranean over the last 1.4 million years.

The link between rainfall in the Mediterranean and the African monsoon shows that the Lake Ohrid data can be ‘scaled-up’ to describe global climate processes.

Any change in the amount of winter rainfall in the Mediterranean will impact water availability and could have strong social and economic implications for this densely populated region.

The key processes controlling rainfall extremes in the Mediterranean we found from this research are similar to the conditions predicted to develop in the future due to human-made climate change.

The next step is to use this exceptional record from Lake Ohrid to link geology and biology to see how climate and environmental change may have caused the evolution of plants and animals in the lake.

BGS worked with scientists from around Europe on the research. Read the full report.