Unless you happen to be a fluent Welsh speaker I’m guessing you didn’t understand much of that. You might have got that fact that I was introducing myself and that it had something to do with geothermal, and possibly you may have realised that whatever I was talking about was taking place in Cardiff, but beyond that I’m guessing it didn’t make much sense.

Well that’s how our science dissemination looks to many in Wales for whom Welsh is their first language. As a UK-wide organisation it can be easy to assume our audience operate primarily in English but there are parts of Wales where up to 60 per cent of people use Welsh as their mother tongue. Whilst the majority of these may additionally speak English, not all do and, even for those with a good understanding of English, it still isn’t their preferred operational language and they may wish to receive information in Welsh.

To anyone that studied a second language at school and thinks they could hold fairly decent conversation whilst on holiday in another country, ask yourself if you could go beyond the simple greetings, asking directions or describing the weather. Could you, for example, describe the work that you do using both layman’s terms and technical jargon? I suspect for most the answer is no. Yet we expect the Welsh-speaking public to understand our research in English-only outputs such as webpages, reports and presentations.

Admittedly there are few Welsh speakers among the BGS staff but should we not make every effort to ensure there is sufficient bilingual material out there to cater for the near one million speakers of the language? The material we provide is often important and people need to be able to find that information in a language they fully understand. This is not only crucial for ensuring the meaning is conveyed but also for creating a sense of ease and comfort that nothing is being missed. If your doctor prescribed your medicines in Latin and didn’t bother to explain to you what they did you wouldn’t feel very confident that you had all the information, so why would we treat our science any differently?

As a Welsh-learner I have taken part in a number of Welsh-language outreach events, including news interviews for the Welsh TV station S4C, translating BGS promotional materials and creating web content, but my most recent encounter with Welsh dissemination was perhaps the most striking. I took part in the BGS Social Media Takeover, where I had to produce a video for Instagram introducing myself and my role and then take questions from the public. As the only person from the Welsh office taking part I thought it would be a nice gesture to record my introduction bilingually. This was met with such positivity in the comments and I even received questions in Welsh, proving that there is a will to have these things accessible to the Welsh-speaking community. Since the lockdown began I have received enquiries from schools asking if there is anyone at BGS willing to talk to pupils about geology in Welsh. Unfortunately we don’t currently have the capacity to do this but it again shows how in demand technical information in the language is.

Finally, we should not forget that we also have a political obligation to communicate through Welsh, with the general feeling among organisations here that it is the ‘right thing to do’. In some communities, the dominance of the English language is seen as unsettling and being able to communicate, even if only a few words of Welsh, immediately softens opinions and develops trust. For example, when carrying out fieldwork in rural Wales, it can go a long way if you can explain to landowners why you want to access their property using a few words of their chosen language. Surely good public relations has to be win-win? Should BGS be investing more in our reach out with regional languages? After all, Welsh is an official language of the UK. Doing so may bring with it many advantages in the future.

Ashley Patton is an engineering geologist and has worked in the Cardiff office since 2013. Her main areas of research include geothermal energy and geohazards, both of which involve a great deal of public outreach and communications. As a proud ‘Cymraes’ (Welshwoman) Ashley has been learning Welsh at evening classes and feels strongly that more needs to be done to disseminate science through the medium of Welsh. 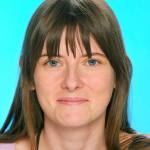