Could groundwater provide the answer to future water resource challenges? 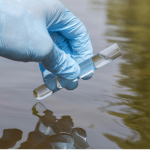 Groundwater plays an important role in providing water resources in the UK, particularly in the south and east of England. Recharge, replenishment of groundwater, is a result of rainfall making its way down through the soil zone after evaporation has been met and typically occurs from September through to April.

BGS, with support from the Environment Agency, has developed a computer model that simulates rainfall recharge and calculates how much may recharge the aquifers. Using this model in conjunction with possible future climate scenarios has shown that future annual recharge is broadly stable and may increase, but that the recharge season will consolidate into fewer months. This means that groundwater available for public water supply and base flow to rivers may increase, but groundwater resources could be more vulnerable to drought.

There is concern that climate change might adversely affect groundwater resources in England and so BGS was commissioned by the Environment Agency to research how these important resources may change in the future (up to 2099). The BGS developed and applied a mathematical model (ZOODRM – a national-scale distributed recharge model) to calculate recharge under different global climate conditions (scenarios). The model was applied to the British mainland.

BGS found that recharge is expected to be greater than it is currently in England during winter months, particularly in the 2050s and 2080s. Summer months will be drier but will not affect groundwater recharge significantly whereas the winter, late autumn and early spring months are forecast to be wetter and will have lower evaporation. This should lead to greater recharge, resulting in higher water levels, increases in the water stored in aquifers and greater flows to our rivers.

However, the shorter recharge season may make aquifers more vulnerable to drought if one or two months have lower than average rainfall. There is also a possibility that the higher groundwater levels may lead to an increased potential for groundwater flooding. It should be noted that factors such as rainfall intensity, changes to the growing season and soil condition will need to be studied further to increase confidence in the results.

We have been developing our groundwater recharge model for nearly a decade. We are now in a position to use it to understand how national-scale issues, such as climate change, affect water resources.

Groundwater is a hidden asset that supports a wide range of ecosystems, such as rivers and wetlands, and must to be protected for future generations. This important area of research will provide a strong evidence base against which we can plan and adapt towards a sustainable future.