Early geological mapping in Ireland has its origins in the search for economic minerals.

By the 1830s, two geological surveys had been established, one run from the Valuation Office by Sir Richard Griffith and the other run as part of the Ordnance Survey.

In 1845, Sir Henry Thomas de la Beche became the founder and first director of the civilian Geological Survey of the United Kingdom under the aegis of the First Commissioner of Her Majesty’s Woods, Forests, Land Revenues, Works and Buildings.

The Act of Parliament of 1845 (265 KB pdf) establishing the survey referred to the completion of a ‘geological survey of Great Britain and Ireland’. There was no specific reference to maps, but the implication to provide the results of the survey in map form was clearly there.

The first local director of the Geological Survey of Ireland was Sir Henry James. The survey’s appointed task under his leadership was to conduct a nationwide survey of Ireland and to produce a map significantly improving the 1839 quarter-inch geological map of Ireland produced by Sir Richard Griffith.

How the survey was to proceed was laid down in the document issued by de la Beche and dated 22 May 1845, entitled, ‘Instructions for Local Directors of the Geological Survey of Great Britain and Ireland‘ (330 KB pdf).

The mapping was to be conducted on the scale of six inches to the mile using the Ordnance Survey topographic maps at this scale as a base, which incidentally proved ideal for geological mapping. Base maps at this scale (metric equivalent) are still used today.

The final maps for the public were to be produced at a scale of one inch to one mile, or 1:63 360. On 22 May 1845, De La Beche wrote to James instructing him to start the new survey’s mapping campaign in south-east Ireland, Dublin, Wicklow, Kilkenny, Carlow, Wexford and Waterford.

There were two reasons for selecting this area. Firstly, de la Beche had a team working just across St George’s Channel in Wales; working both sides could resolve common problems. Secondly, there were known economic deposits in the area, coal at Castlecomer and copper at Avoca, and it would have been foremost in de la Beche’s mind to show the economic benefits of the new geological survey.

The start of one-inch geological map production was dependent on the availability of the Ordnance Survey 1:63 360 topographic sheets, which were used as a base. This latter series was first authorised in April 1851 and it was intended to cover the whole country in 59 sheets of the same dimensions as the Ordnance Survey’s six-inch maps, 90 × 60 cm. This size was thought to be too impractical, so they soon decided to issue sheets a quarter of the size.

Each sheet was numbered to the original 59 sheet series numbers with an additional quarter-sheet designation, SW, SE, NW or NE, for example 46 SE. This numbering system lasted until 1858, when it was proposed that the quarter sheets should be accorded full-sheet status and would be numbered 1 to 205. Before 1873, the base Ordnance Survey maps used by the Geological Survey were the outline edition. The ‘hill edition’, with hachuring, was used from 1873 onwards.

Mapping proceeded in the field on six-inch sheets quartered for convenience of handling. The geologist recorded the rock types at each exposure in pencil and made notes or sketches in field notebooks. The information recorded would then be inked in during the evening.

Another evening job was to duplicate the information on a second set of sheets. Periodically, the geologist would also draw the essentials onto a set of two one-inch maps. Each one-inch map would be sent to Dublin for approval on completion.

When approval had been granted, the geologist would be given a new, clean copy of the one-inch map onto which he placed all the information required for the published sheet. This was then sent to the Ordnance Survey for engraving, a first proof being returned.

Final amendments were made and the first proof returned to the Ordnance Survey.

After the amendments had been engraved, the second proof came back and the geologist added the standard colours to make the ‘pattern copy’. The pattern copy was the standard to which copies were coloured for sale, which was usually done by the survey colourists in England.

In 1887, the primary geological survey of Ireland, begun over 40 years earlier in 1845, was coming to a close. The summer of 1887 saw George Henry Kinahan and Sidney Berdoe Neal Wilkinson at work in Donegal. Wilkinson completed his work first and Kinahan stayed on until October, so finishing the survey. Gordon Herries Davies, in his book ‘Sheets of Many Colours‘ tells the story:

It must have been one evening towards the close of that month when Kinahan plied his hammer to the very last rock exposure to be examined during the primary geological survey of Ireland. Having peered at the resultant sliver of rock through his lens, he must have entered some comment in his notebook, recorded the site upon his field-sheet, closed his map-case, and turned his steps homeward. It was all a routine that he knew so well; thousands of other days in the field had ended for him in precisely the same way as the evening shadows lengthened. But this evening was really different. The geological campaign which had opened in County Wexford in the summer of 1845 was now at long last concluded. And how appropriate that it should have been Kinahan who made those final observations which brought the primary survey of Ireland to its close. He was a stormy character certainly, but in terms of service within Ireland he was the Survey’s senior officer. For well over thirty years he had carried his hammer and his maps through some of Ireland’s most rugged terrain; he surely deserved to strike the final hammer blow on behalf of the Survey. As he trudged home that last evening did his memories perhaps return to that now distant occasion in August 1854 when, fresh out of Trinity College, he had reported for training at Bantry, there to find himself in the inspiring company of Jukes, Ramsay, and Sir Henry de la Beche himself. In those days a one-inch geological map of Ireland was still merely a project under discussion, but now in Donegal he and Wilkinson had just fashioned those final pieces necessary to complete the great one-inch geological mosaic.’

This was the close of the mapping programme. Production of the final maps took a few years longer, with the final seven maps published in 1890.

Perhaps the last word should go Mrs E Williams, who was responsible for colouring the one inch geological maps. Her job was to turn them from an uncoloured outline to what could be regarded as a work of art. Again a quote from Gordon Herries Davies tells the story.

During the closing decades of the nineteenth century [Mrs Williams] was employed to work at home colouring those maps of the Geological Survey of Great Britain and Ireland which were destined for distribution to the public. As we contemplate one of the early copies of that colourful final Irish one-inch sheet — Sheet 10 — it is Mrs Williams’s handiwork that excites our admiration. Toiling in the grimy air of Victorian London, close to the Metropolitan Cattle Market and hard by the Midland Railway’s line out of St Pancras, hers was a landscape far removed from the Irish landscape of purple mountains, tranquil rivers, sandy eskers, brown peat-bogs, and storm-beaten cliffs — an Irish landscape which had become so familiar to generations of geologists as they painstakingly traced out those geological lines which Mrs Williams’s brush now had to follow with such care and precision.

High-resolution viewing of images of almost all the small- and medium-scale geological maps produced by the BGS since mapping started in 1832.

About the BGS maps portal

The portal provides access to over 7000 high-resolution viewing images of almost all the small- and medium-scale maps produced by the BGS since mapping started in 1832 right up to the most recent maps released in 2014.

A short history of the Geological Survey of England and Wales.

A history of geological mapping in Scotland, including timeline and early beginnings.

Brief historical notes and links to key documents on the early 1:63 360 map series for England and Wales, Scotland and Ireland. 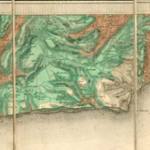 An insight into the origin and early practice of systematic geological mapping by the Geological Survey; the application of hand-colouring; why the constant need for revision?