BGS Geophysical Tomography (GTom) has analytical and numerical expertise in all aspects of geoelectrical theory and data processing. We are actively researching and developing new modelling and data analysis methods. Recent advances in acquisition, reconstruction and analysis include:

We have also developed inversion strategies to extract electrode movements from geoelectrical monitoring data, which reduces or eliminates image distortion for applications on unstable ground and enables the electrode grids to act as distributed motion sensors.

Electrical resistivity tomography (ERT) surveys have tended to use well-understood, traditional electrode configurations to gather resistivity data. PRIME permits the use of arbitrary arrangements of electrodes and enables the collection of very large measurement sets that can cover extensive areas at high data density. Research is therefore ongoing into algorithms that can make use of this flexibility to maximise ERT image resolution.

Software has been developed that can automatically generate optimal electrode arrays for ERT surveys with 2D, 3D, cross-borehole and buried electrode arrays. These optimised surveys make efficient use of multichannel systems (e.g. PRIME) and have been tested using synthetic modelling studies both in the laboratory and in the field. They have been shown to provide better image resolution than traditional arrays of the same size (e.g. dipole-dipole).

Typically, ERT monitoring involves repeating the same survey on a time-lapse basis. The resolution of the monitoring images can be improved by using an adaptive, optimal, experimental design method. This uses previous images to guide the choice and design of future surveys. These survey designs are time dependent and, compared to dipole-dipole or static optimised surveys that do not change over time, focus a greater degree of the image resolution on regions of the subsurface that are actively changing.

The adaptive optimisation method was validated with a controlled laboratory monitoring experiment comprising a well-defined cylindrical target moving along a trajectory that changes its depth and lateral position. The algorithm was implemented on a standard PC in conjunction with a modified, automated, multichannel resistivity imaging system. Data acquisition using the adaptive survey designs required no more time or power than with comparable standard surveys and the algorithm processing was sufficiently rapid to be carried out while the measurement system batteries recharged. The results showed that adaptively designed optimal surveys gave an extra increase of 15 per cent in image quality over and above that gained by using static (time independent) optimised surveys instead of dipole-dipole.

If the electrode positions used in geoelectrical resistivity inversion are uncertain then the resulting tomographic images will exhibit artefacts that can obscure genuine features and time-lapse changes in the subsurface. This is a particular problem when using resistivity monitoring on unstable slopes such as landslides. We have developed innovative inverse methods to recover movements of resistivity imaging electrodes on unstable ground, either for 2D surveys (movement along a linear electrode array) or 3D surveys (movements in both directions across a grid electrode array).

The efficacy of these techniques has been demonstrated using numerical simulations, laboratory experiments and data from field monitoring sites.

Using a monitoring installation on an active landslide, it was possible to recover sequences of movement over timescales of days to years. Typically these methods are able to recover the movements of the electrodes to an accuracy of 5–10 per cent of the spacing between the electrodes. Over short timescales, when the resistivity of the ground did not change significantly, an order-of-magnitude better accuracy was achievable. This enabled the onset and acceleration of landslide activity to be detected with a spatial resolution of a few centimetres and a temporal resolution of a few days.

Identifying interfaces in resistivity images can be difficult due to the smoothness constraints typically used in the inversion. A statistical, population-based approach has been used to guide a ‘fuzzy clustering’ method, which identifies clusters of related cells in the resistivity images while avoiding the assumption of hard edges. It also provides a measure of the uncertainties in the cluster boundaries. The algorithm was validated by direct comparisons with known bedrock depths at two 3D resistivity survey sites and performed as well as other image analysis methods but with much less user input.

Such techniques were also used to automatically track the motion of tracers in resistivity monitoring images. Using Bayesian inference techniques, in the form of a Kalman filter, the trajectory of the tracer was monitored by predicting and updating a state model representing its movements. Observations for the Kalman filter were gathered using a maximally stable volumes algorithm to isolate the tracer from the background in the resistivity images. This method was able to track the movements of tracers in 2D and 3D monitoring experiments successfully in the presence of noise without manual intervention.

Resistivity imaging of the Hollin Hill landslide in Yorkshire clearly shows formations with different resistivities (Redcar and Whitby Mudstone formations (RMF; WMF) with lower resistivities at the base and top of the image and the intermediate Staithes Sandstone Formation (SSF) with higher resistivities). These images have smooth boundaries, which make locating the exact interface difficult (Figure 1).

P- and S-wave seismic refraction tomography surveys have also been carried out and used to produce images of Poisson’s ratio, which give a very clear indication of the boundary between the WMF and SSF. By extracting the surface from the seismic images and including it as a structural constraint in the resistivity inversion, the resolution of the WMF/SSF boundary was much improved in the resistivity image (Figure 2).

The preliminary results in the animation show the changes in resistivity in the Hollin Hill 3D geoelectrical model and the subsequent effects on the distribution of shear strength, which drops dramatically in the winter months around the break of slope near the top of the modelled region.

If you want to discover more then please contact Paul Wilkinson or Jonathan Chambers. 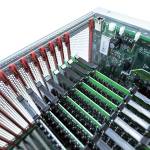 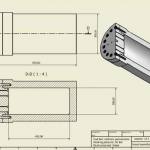