A tool that is easy to deploy almost anywhere, which enables us to detect and visualise the layering of superficial deposits and underlying bedrock – BGS has acquired a number of Tromino passive seismic instruments, as shown in Figure 1.

A very compact and lightweight instrument (the size of a small brick), the Tromino comprises a lightweight, mobile seismometer. It measures passive seismic noise in the ground generated by natural sources, such as waves and wind; and anthropogenic sources, such as cars and trains. In most cases, spectral characteristics of the vibrations are analysed for a simple ground model solution consistent with the noise recordings. The technique is often referred to as Horizontal Vertical Spectral Ratio (HVSR).

In simple terms, an interface between a weak rock overlying a stronger layer can give rise to an amplification of the horizontal vibration component compared to the vertical component of seismic noise at a particular frequency. That frequency is inversely proportional to the depth of the interface, as shown in Figure 2, where a 2D section showing the depth to this interface can be easily mapped by undertaking a succession of surveys along a profile.

Our research has been focused on extending the application of this technique to as broad a range of geological settings as possible in order to better understand the limitations, resolution and uncertainty associated with the deployment of this technique. The great strength of the Tromino is in mapping superficial deposits or relatively weak rock overlying competent bedrock. We have established that it can be used very effectively as a reconnaissance survey tool for a range of applications. These include basement mapping, superficial thickness mapping, beach thickness surveys and mapping of geohazards such as landslides, liquefaction potential and buried hollows.

A Tromino survey was undertaken to map the thickness of clay and silt deposits in a glacial channel, contributing to understanding the geology for a hydrogeological study. We gathered Tromino data along number of parallel profiles (e.g. Figure 3), and processed them to produce colour contour plots (Figure 4). These were digitised and used to build a 3D model of the buried channel architecture.

The foundation excavations for four wind turbines at Carsington Pasture, near Wirksworth in the Derbyshire Peak District, exposed buried, sediment-filled hollows in the dolomitised bedrock (Figure 5). The depth to competent rock is variable as a consequence of weathering related to early Carboniferous fluid flow (hypogene) processes on the southern edge of the carbonate platform. Furthermore, the dolomitised limestones are faulted. The difficult ground conditions have significant implications for the engineering design. The BGS used the Tromino to measure the seismic noise at five-metre intervals across one of the wind turbine footings to characterise the near-surface hollows and bedrock fracturing (Figure 6).

Faults within the chalk of the Yorkshire Wolds are often difficult to map because they lack any surface expression. But because the faults are often mineralised with calcite, they can affect the flow of groundwater. The Tromino was used to detect these faults by picking up the variation in stiffness of the bedrock (Figure 7). This will enable more accurate modelling of the hydrogeology.

We undertook Tromino surveys in contrasting beach environments (range of grain sizes, beach profile and underlying bedrock), backed up with other geophysical and invasive techniques in order to verify the Tromino data. An example of the Tromino in action on a coarse gravel beach is shown in Figure 8.

We found that the Tromino is well-suited for assessing beaches composed of finer material (sand to medium gravel) where there is a good contrast in physical properties between the beach material and the underlying bedrock- see Figure 9.

Underlying the glacial deposits of the Holderness region of East Yorkshire, is an interglacial shoreline, cut into the Chalk bedrock. Tromino surveys were undertaken which helped to delineate this feature, as shown in Figure 10.

Evaluating the depth to a subsurface interface using passive seismic methods requires knowledge of the velocity structure, at least to the depth of the interface to be interpreted. Hence, any uncertainty in the velocity structure will also be inherent in the resulting depth or thickness determinations. This uncertainty may be tolerable in some applications, but where greater certainty is required passive seismic surveys can be complemented by other methods, such as Multichannel Analysis of Surface Waves (MASW) that provide some understanding of the velocity profile.

Tromino has often been used in parallel with other geophysical, and geotechnical, techniques. This facilitates more accurate calibration of the modelled depth to bedrock, and aids the interpretation of the more subtle features in the data. The methods commonly used alongside passive seismic are MASW; seismic refraction; gravity; ground penetrating radar (GPR); electrical resistivity tomography (ERT).

The images shown in Figure 11 illustrates MASW, GPR and cone penetration tests (CPT), which were used to constrain the data from the Tromino, and helped to build a conceptual ground model of the beach.

At BGS we have also applied passive seismic to seismic micro-zonation, glacier thickness, mapping bedrock in urban areas, and civil engineering structures such as embankments. 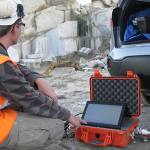 Applications range from mineral exploration and waste management, to monitoring active processes within the subsurface, such as the movement of pollutants, or the flow of groundwater in unstable slopes affecting infrastructure. 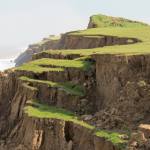 BGS have long-term monitoring observatories where data have been collected, in some instances, since 2001.