Brachiopods have a very long history of life on Earth; at least 550 million years. They first appear as fossils in rocks of earliest Cambrian age and their descendants survive, albeit relatively rarely, in today’s oceans and seas. They were particularly abundant during Palaeozoic times (248–545 million years ago) and are often the most common fossils in rocks of that age.

Brachiopods vary considerably in size. The aptly named Carboniferous genus Gigantoproductus may grow up to 30 cm across. In contrast, the Jurassic rhynchonellid genus Nannirhynchia is minute, generally only two or three millimetres across — the size of a large pin head.

Brachiopods are marine animals belonging to their own phylum of the animal kingdom, Brachiopoda. Although relatively rare, modern brachiopods occupy a variety of seabed habitats ranging from the tropics to the cold waters of the Arctic and, especially, the Antarctic.

Brachiopods are virtually defenceless and their shell, enclosing the animal’s organs, is the only protection against predators. Most are permanently attached by a fleshy stalk (the pedicle) to a hard, sea-floor surface and are incapable of actively pursuing food. A few species can attach themselves directly to soft sediment and others remain unattached. Opening and closing of the shell allows food-bearing currents of water to pass through it.

The shell comprises two valves that are composed of calcite or chitinophosphate (calcium phosphate plus organic matter). The pedicle (or ventral) valve is typically externally convex. The other valve (the brachial or dorsal valve) may be similar but, in some brachiopods, it is extremely concave or more rarely conical.

Many brachiopods have their valves hinged together, typically by a pair of ventral teeth and dorsal sockets. The snugly fitting join between the two closed valves is called the commissure. The inner surface of the valves may bear various projections and depressions that reflect the location and form of organs or muscles that open and close the valves. The external surface may show various types of ornamentation including concentric growth lines, lamellae and wrinkles (rugae), ribs, folds, sulci and spines. 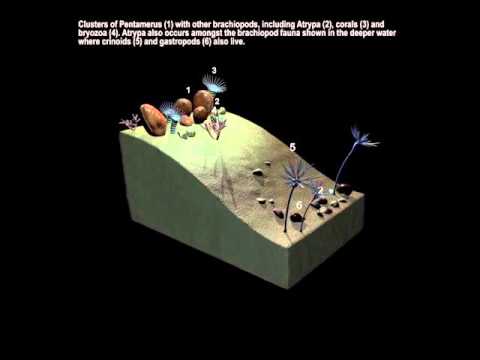 An artist’s impression of a Silurian seascape showing, on the right-hand side, clusters of Pentamerus (1) with other brachiopods, including Atrypa (2), as well as corals (3) and bryozoa (4). Atrypa also occurs amongst the brachiopod fauna shown in the deeper water on the left-hand side where crinoids (5) and gastropods (6) also live. BGS © UKRI. Based on a painting by Richard Bell.

A large part of the space between the two valves is occupied by a fleshy, hollow organ (the lophophore), which has long twisted or coiled arms and filaments. Cilia (hair-like organs) attached to the filaments beat rapidly, drawing in food-bearing water currents.

Water currents carrying food particles enter between the brachiopod’s valves through the lateral inhalant aperture. Food is caught by the filaments on the lophophore arms and filtered water leaves via the median exhalant aperture.

Brachiopods are characteristic of shallow-marine environments and, in some Palaeozoic rocks, they are the main rock-forming component. Brachiopods are also particularly suitable for palaeoecological analyses. Influenced by such factors as water depth, salinity, oxygen levels and static lifestyle, the distribution patterns of fossil brachiopods provide a useful tool in deducing the position of ancient shorelines and the past distribution of land and sea. Because of the rapid evolution of some brachiopod lineages, they can be useful for understanding the relative ages of rock successions and for correlation.

Cambrian rocks characteristically contain a diverse and abundant brachiopod fauna that  preludes a dramatic diversification, making brachiopods, together with trilobites, the primary stratigraphical guide fossils in the shallow-water facies of the Ordovician. They are also important in the Silurian and Devonian and more locally in the Carboniferous, but many major groups became extinct at the end of the Palaeozoic.

The genus Lingula has survived virtually unchanged from the Cambrian to the present day. Unlike most brachiopods, it lives successfully in brackish water environments such as tidal mud flats. Lingula uses its pedicle to move up and down in the vertical burrow in which it lives. The pedicles of Lingula are a delicacy in some countries and are known as ‘lamp shells’

In the Silurian rocks of Shropshire, unusually preserved Pentamerus oblongus brachiopods have led to the rock in which they occur being called ‘government rock’. Here, the original shell material has dissolved away leaving only internal and external moulds. Where shell structures relating to muscle attachment inside the pedicle valve have disappeared, the moulds are characterised by arrow-like slits that look like the symbol used for government benchmarks and on prison uniforms.

The brachipod Cyrtospirifer verneuili, from slates of late Devonian age near Delabole in Cornwall, is known as the Delabole butterfly. The naturally wide hinge-line of Cyrtospirifer has been distorted and widened further by the pressures in the Earth’s crust that led to the formation of the slates themselves.