The Holbeck Hall landslide, south of Scarborough in North Yorkshire, attracted considerable interest when it destroyed the four-star Holbeck Hall Hotel between 3 and 5 June 1993. A rotational landslide involving about 1 million tonnes of glacial till cut back the 60 m-high cliff by 70 m. It flowed across the beach to form a semicircular promontory 200 m wide projecting 135 m outward from the foot of the cliff. 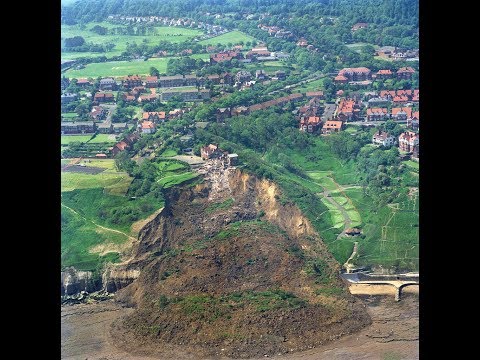 Holbeck Hall landslide aerial survey. Previously unseen aerial footage of the survey carried out by BGS of the landslide that affected the Holbeck Hall hotel in June 1993. BGS © UKRI.

The first signs of movement on the cliff were seen six weeks before the main failure, when cracks developed in the tarmac surface of footpaths running across the cliffs. These were filled to stop ingress of water to the cliff, but when the cracks reopened shortly before the main failure, the council closed the cliff paths below the hotel. At this time, a small part of the hotel garden was also observed to have suffered a minor movement.

There was originally 70 m of garden between the hotel and the cliff edge. At 6 am on 4 June, a guest saw that 55 m of the garden had disappeared. The hotel was evacuated and the landslide continued to develop, culminating in the collapse of the east wing of the hotel by the evening of 5 June.

The likely cause of the landslide was a combination of:

The landslide is a rotational landslide degrading to a mud/debris flow which covered the rocks on the beach (platform).

The cliff consists of glacial till (sandy, silty clay) resting on a low cliff of the Middle Jurassic Scalby Formation. The Scalby Formation comprises the Scalby Mudstone and the Moor Grit (sandstone).