On 12 February 2013, the BGS Landslide Response Team received reports of a landslide affecting the railway near Hatfield and Stainforth station, near Doncaster in South Yorkshire.

The landslide occurred in a spoil heap at Hatfield Main Colliery and distorted a large section of train line along the Doncaster to Goole and Doncaster to Scunthorpe lines. Train services in the region were significantly affected and this section of the line was closed until July 2013.

The landslide was first reported in the media on 12 February, when NetworkRail issued a statement:

We have been carefully monitoring the track near Hatfield colliery at Stainforth since Saturday afternoon (9 Feb) when a train driver reported a ‘rough ride’.

Unfortunately conditions have deteriorated and it is no longer possible to run services through the area. We anticipate that there will be disruption to services between Doncaster and Goole and Doncaster and Scunthorpe for some time.

Since then, the media reported that the landslide continued movement and it was likely that that would the case for some time.

The geology underlying the spoil heap is classed as alluvium, which is usually soft to firm, unconsolidated, compressible silty clay with layers of sand and gravel deposited on river terraces and lacial lake sands from the Devensian Hemingbrough Glaciolacustrine Formation. Local thickness of these deposits varies between 5 and 10 m. These deposits rest on bedrock of the early Triassic Chester Formation (formerly known as the Nottingham Castle Sandstone Formation).

History and land use changes

Current land use includes large areas of artificial ground in the form of colliery spoil. The sequence of Ordnance Survey (OS) historical maps (1854, 1893, 1907, 1933, 1948 and present land use) shows that previous land use was dominated by agriculture before the 1930s. The historical OS maps also provide a further indication of the nature of the alluvial deposits.

The 1933 OS map shows an increase in industrial activity, including the construction of extensive railway sidings.

The existence of land drains and borrow pits near a tile kiln just south of the site suggest locally high clay contents in these alluvial deposits. 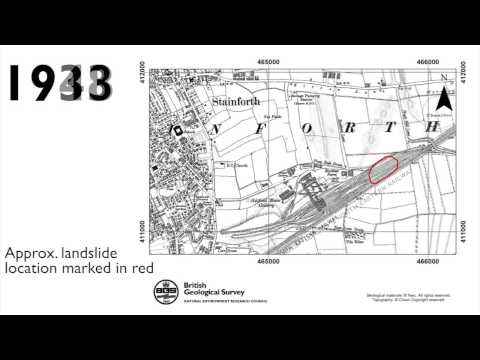 There is a close relationship between rainfall and the occurrence of landslides. Smaller landslides often occur during or shortly after periods of heavy rainfall. Large landslides often require much more time and successions of rainfall events before slopes become unstable, as water can take considerable time to percolate to greater depths.

The morphology of the slope strongly suggests a rotational mode of failure. Along the crown of the slope extensive tension cracks were observed that gradually grew in size as the landslide progressed its downward movement. A slope like this can be viewed as a large pendulum that slowly moves into a more stable position. However, this can take quite some time, particularly if, as at Hatfield, there is still considerable surface water visible at the top of the slope. This water will slowly seep through the tension cracks (shown as red dashed lines) into the landslide and continue to facilitate movement.

BGS has added a ‘Slope failure’ category to its landslide type in the National Landslide Database. This allows us to capture the recent increase in landslides occurring on artificial ground, something that is clearly of interest to the public and infrastructure asset managers.