As a pre-digital age work, it contains information that is now hard to find. It includes references not only to traditional geological publications but also to a much wider range of economic and local, in-country sources. It looks at all mineral commodities, each being subdivided into six main subsections:

Over the lifespan of the card catalogue, many of the country or region place names and often the borders have changed. Sections can be found under earlier and current names. To fully research a country, users need to look at the different sections: for example, for Botswana also check Bechuanaland; for Namibia also check South West Africa. A full list of former country names is maintained by Wikipedia.

It was agreed at the Imperial War Conference of 1917 to set up an Imperial Body, which would be charged with the duties of collecting information regarding the mineral resources and metal requirements of the British Empire. The Imperial Mineral Resources Bureau was set up in June 1919 for this purpose. The Mineral Index, a bibliographic card index documenting the occurrence, mining, processing and uses of mineral raw materials around the world, was established within the Intelligence and Publications Section of the bureau. Bibliographical information extracted from publications and reports from around the world was collected systematically for the period 1917 onward and older references were added on an ad hoc basis.

By 1980, approximately 400 000 bibliographic citations had been added to the Mineral Index. In that year, a computerised database was set up to replace the handwritten indexing of geological and minerals-related literature. An online bibliographic database called MinSearch succeeded the old card index, but in 1985 reductions in Government funding led to its demise. None of the data from the period 1980 to 1985 was preserved.

Original instructions for the card catalogue (1967)

Certain sections are classified by uses of groups of mineral commodities, e.g. refractories; pigments. Each of their sub­sections maybe subdivided into six sections (general; countries, etc.). In addition, certain of these sections do not readily fall into the ‘Mineral’ classification, e.g. ‘Policy, mining law’, ‘General geology’, ’Geophysics’, etc.

The ‘Countries’ section of each item is divided into ‘World’, ‘Commonwealth’ and ‘Foreign’, the last two being subdivided into continents in the following order:

Individual countries are listed alphabetically within their respective continents.

All literature taken by the former Overseas Division is searched, the following information being recorded, in manuscript, on 5″ × 3″ index cards:

The section in which the card is to be filed is recorded on the back of the card.

Papers and books not held in the BGS Library, which are borrowed from other libraries in connection with departmental enquiries, etc., are indexed in the normal way, but the reference is written in red, unless a copy of the article is made.

Cards are filed in date order in their respective sections and subsections and alphabetically by author within each year.

In addition, the enquirer should always refer to the regular publications of global geological and mines departments (e.g. annual reports of geological surveys; the Minerals Yearbook of the US Bureau of Mines) and trade journals (e.g. annual review numbers of Engineering Mining Journal, Mining Journal, Eastern Metals Review) and similar publications.

The indexing staff will be pleased to help in case of difficulty.

Open access to a number of our digital scan collections, including borehole log scans and published maps.

We have extensive collections of books, maps, journals and BGS publications. We also hold special collections of British geological photographs and archive material, chiefly the historical archives of the BGS. 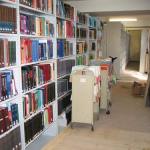 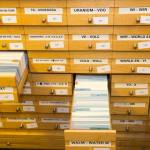