Happisburgh, on Norfolk’s North Sea coast, is a village with a population of 1400 people in about 600 houses. The village contains a notable stone church dating from the 14th century, an impressive manor house, listed buildings and a famous red-and-white striped lighthouse.

Although now a coastal village, Happisburgh (pronounced haze-bruh) was once some distance from the sea, parted from the coast by the parish of Whimpwell, long since eroded away. Historic records indicate that over 250 m of land were lost between 1600 and 1850.

More recently, the village was affected by the tragic floods of 1953 that claimed the lives of 76 Norfolk residents.

Coastal defences built at Happisburgh have slowed down the rate of retreat. However, large sections are now in disrepair. Sea-level rise and climate change, including increased storminess, may also increase the rate of erosion.

Agriculture and tourism contribute significantly to the economy of the village and surrounding hinterland, although this is threatened by the receding cliff line. Prior to the construction of a rock embankment at the northern end of the survey site, the erosion had claimed at least one property per year plus significant quantities of agricultural land.

The basal unit within the stratigraphical succession at Happisburgh is the How Hill Member of the Wroxham Crag Formation. These deposits are typically buried beneath modern beach material but are periodically exposed following storms. They consist of stratified brown sands and clays with occasional quartzose-rich gravel seams that are interpreted as intertidal or shallow marine in origin.

Unconformably overlying these marine deposits are a series of glacial lithologies deposited during several advances of glacier ice into the region during the Middle Pleistocene (around 780 to 430 ka BP) (Lee et al., 2002; Lee et al., 2004). The survey site has a tripartite geological succession.

The upper surface of the till undulates and comprises a series of ridges and troughs upon which the overlying ‘Ostend Clay’ crops out. This unit is between 2.3 and 3.4 m thick and consists of thinly laminated, light grey silts and dark grey clays.

In turn, these beds are overlain by 2 to 4 m of weak, stratified sand (Happisburgh Sand Member) with occasional silty-clay horizons.

It is likely that the Norfolk cliffs have been eroding at the present rate for about the last 5000 years, when the sea level rose to within a metre or two of its present position (Clayton, 1989). Therefore, the future predictions of sea-level rise and storm frequency due to climate change are likely to have a profound effect on coastal erosion and serious consequences for the effectiveness of coastal protection and sea-defence schemes in East Anglia in the near future (Thomalla and Vincent, 2003).

As part of a programme of work monitoring coastal erosion and landsliding at several sites around the coast of Great Britain, we are surveying the cliffs adjacent to the village of Happisburgh in Norfolk with terrestrial LiDAR scanning. The resulting computer model enables volume calculations and observations to be made as to the way in which the coast is eroding. The results from the survey provide data for models of coastal recession.

From this survey, the following conceptual model has been proposed:

The cliff surface profiles show that the erosion process is non-uniform, involving the cyclic formation of a series of embayments that continually enlarge. This could infer landsliding processes involving block falls, mudflows and running sand. 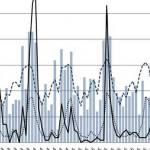 We combine rainfall statistics and landslide data to produce graphs demonstrating the relationship between landslides and rainfall. 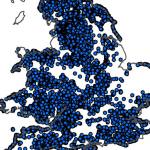