The Parallel Roads of Glen Roy

The western Scottish Highlands are home to some of the most spectacular landscapes in the UK and was the destination for a recent expedition for the BGS Sea Floor, Coasts and Landscapes team. The region is not just good for outdoor activities such as hiking and kayaking; it also records an ancient dynamic glacial landscape that formed over 11 700 years ago during a period known as the Loch Lomond Stadial or Younger Dryas.

Glen Roy is a National Nature Reserve, located around 15 miles north of Ben Nevis, the highest summit of Scotland and the UK. The valley contains the ‘Parallel Roads’ of Glen Roy, which were some of the most mysterious features identified in the landscape during the 18th and 19th centuries, attracting much speculation at the time.

Three dominant parallel lines contour the valley at 350 m, 325 m and 260 m, and were originally thought to be artificial ‘roads’ or even works of art. Amongst a few well-known philosophers (including John MacCulloch, Thomas Lauder, Charles Lyell, William Buckland and Charles Darwin), theories started to develop to suggest that the parallel lines cut into the landscape were created by shorelines from the sea or by ancient lakes. Louis Agassiz later proposed theories of an ‘ice age’ and that the ‘roads’ were formed by lakes that were dammed by ancient glaciers. This was revolutionary thinking for the time.

The Loch Lomond Stadial is now recognised as the last period where the climate sufficiently cooled in Britain to form glaciers after the previous ice sheet had melted. The geomorphology around Glen Roy and the surrounding area resulted from glaciers that nucleated in the Highlands. These glaciers advanced north and eastwards through valleys cut during previous ice ages, heading towards Glen Spean and north up into Glen Roy. It is now known that the Parallel Roads are a result of an ancient, ice-dammed lake, which carved stepped, narrow terraces into the landscape along its shoreline. As the climate sufficiently warmed, the ice receded and the glacial lake drained, leaving behind the shorelines, or ‘roads’, that we see today on the valley sides.

Glen Roy is a natural laboratory, where the geomorphology of glacial landforms and sedimentary sequences created during glacier advance, oscillation and retreat can be studied in detail. Some of the features of the drained lake of Glen Roy are fantastic analogues to other sites that are not fully accessible due to the presence of water in the lochs, such as Loch Lomond. Moraines, paraglacial and post-glacial mass-wasting, deltas and subaqueous fans are just some of the features that are well-preserved and exposed in the area. Evidence of liquefaction in silty sands, coarse gravel beds and thick sequences of chaotic deposits suggest high-energy depositional environments during the infilling of the valley basin.

The area is of interest to the BGS Sea Floor, Coasts and Landscapes team as it helps us to understand the spatial distribution and lateral and vertical variability of sediments that might be encountered in steep nearshore and offshore subaqueous environments elsewhere. This can have implications for the foundation design of offshore renewable energy infrastructure, including nearshore cable routes. The area can also inform our conceptual understanding of ground conditions that might be relevant for shoreline infrastructure such as transport routes. The area is also a hugely popular tourist destination and so such geomorphological features are important considerations for future development and planning. 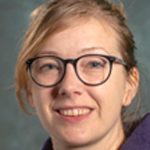