A series of active landslides stretch several kilometres along the cliffs to the south of Scarborough. Some of these are large, deep-seated rotational landslides that have destroyed properties whereas others are rockfalls, some of which have caused fatalities. Care should be taken when walking this section of coast on the beach and along the cliff-top path, as landslides can happen without warning.

In 1993, a large landslide attracted the nation’s attention when it destroyed the four-star Holbeck Hall Hotel between the nights of 3 and 5 June. A rotational landslide, involving about one million tonnes of glacial till, cut back the 60 m-high cliff by 70 m. It then degraded to a mud/debris flow that covered the beach to form a semi-circular promontory 200 m wide projecting 135 m outward from the foot of the cliff. Fortunately, the hotel was evacuated before anyone was hurt, despite the alleged reluctance of the guests to leave, even when there was ‘a gaping chasm 10 m from the hotel’.

The first signs of movement on the cliff were seen six weeks before the main failure, when cracks developed in the Tarmac surface of footpaths running across the cliffs. These were filled to stop ingress of water to the cliff but, when the cracks re-opened shortly before the main failure, the council closed the cliff paths below the hotel. At this time, a small part of the hotel garden was also observed to have suffered a minor movement.

While this landslide took place at the coast, the cause was not just simply erosion by the sea. It was likely a combination of driving factors including rainfall of 140 mm in the two months before the slide took place; issues related to the drainage of the slope; pore water pressure build-up in the slope, and the type of geology. The cliff consists of glacial till (sandy, silty clay) resting on a low cliff of the Middle Jurassic Scalby Formation. The Scalby Formation comprises Scalby Mudstone and Moor Grit (sandstone).

During the development of Scarborough as a seaside resort, the Victorians regraded and landscaped large sections of cliff (including the existing landslides) to make public areas with gardens and promenades.  They also built large hotels and private dwellings in many cliff-top areas.  Managing this legacy has been the job of Scarborough Borough Council who, along with the North East Coastal Observatory, monitor the cliffs and landslides.  They have been assessing and maintaining this coast for decades and much of their work is freely available on their websites, including a great source of data and reports.

This famous landslide was reported in the national and international press and has been used to demonstrate landslide processes and slope remediation to schools and university groups ever since.

There is a free car park at the top of the cliff (Sea Cliff Road, Scarborough, YO11 2XU) and you can join the Cleveland Way National Walking Route to walk down the remediated cliff slope.

Interested in the geology of Scarborough? Visit the Rotunda Museum (YO11 2NN), one of the oldest geology museums still in use in the UK. The building, constructed in 1829, houses a collection of Jurassic geology from the Yorkshire Coast. 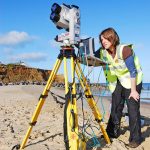