£0.3 per km2 Subject to number of users, licence fee and data preparation fee.

Local-level to regional-level use

The geological indicators of flooding dataset is a digital map based on the BGS Digital Geological Map of Great Britain at 1:50 000 scale (BGS Geology 50K). Coverage includes England, Wales and Scotland. It characterises superficial deposits on BGS Geology 50K in terms of their likely susceptibility to flooding, either from coastal inundation or fluvial (inland) water flow.

Geological maps show where all the floodplains and coastal plains in Britain are located and therefore the main areas at greatest risk of flooding; the BGS has produced the geological indicators of flooding dataset from this information. The map shows areas vulnerable to two main types of flooding: inland (river floodplains) and coastal/estuarine.

BGS geological indicators of flooding data should be regarded as complementary to, and not a replacement for, existing flood risk maps such as those provided by the Environment Agency.

Inland flood plains are flattish areas near to rivers where mud, sand and gravel were deposited by previous floods. These materials are commonly known as ‘alluvium’ on geological maps, but they can also include lake deposits and river terraces.

On coastal plains, a range of marine deposits, for example tidal flats, define areas where the sea has formerly occupied the land.

The map is based on observation of the types of geological deposit present and does not take into account any human influences such as house building or flood-protection schemes. It also doesn’t take into account low-lying areas where flooding could occur but where there are no materials indicating flooding in the geological past.

The majority of these coastal and fluvial superficial deposits are considered ‘young’ in geological terms, most having been formed within the last few tens of thousands of years. Typically they have been laid down by processes of erosion and deposition and they have produced subtle topographical features, resulting in the low-lying landforms we call floodplains and coastal plains.

On this basis, the floodplains and coastal plains constituting areas of greatest susceptibility from flooding can be both visualised and defined by superficial deposits as depicted on geological maps.

Zone 1 deposits include river alluvium and lacustrine (lake) alluvium. Zone 1 deposits are susceptible to the first influx of flood waters and are perceived to have a high potential to flood.

Zone 2 deposits include younger river terraces or ‘floodplain terrace’ (raised level areas adjacent to or within floodplains, which represent the level of the floodplain prior to the most recent episode of floodplain formation). Zone 2 deposits are perceived to be susceptible to flooding in more extreme events such as very heavy and prolonged periods of rainfall and/or extreme high tides, with high wind speeds and storm surges. They are the areas where secondary flooding may occur. Older and higher river terraces have been excluded as they tend to lie outside the geologically defined floodplain and relate to older generations of floodplains extending back over hundreds of thousands of years in some cases.

The two types of flooding, fluvial and coastal, are each separated into two zones.

Flooding from rivers where the capacity of the river channel is exceeded and water overflows. This is identified as fluvial in the dataset and is subdivided into higher (zone 1) and lower (zone 2) susceptibility categories.

Flooding from the sea as a result of high tides and storm surges is identified as coastal flooding in the dataset. This is similarly subdivided into higher (zone 1) and lower (zone 2) susceptibility categories.

Both classifications are also subject to an element of pluvial flooding from land as a result of an episode of heavy intense rainfall. We do not have a specific category to identify this type of event.

This dataset does not currently identify the presence of permanent standing bodies of ‘water’, such as lakes or canals.

The geological indicators of flooding dataset should be regarded as complementary to, not a replacement for, existing flood risk maps such as those provided by the Environment Agency. 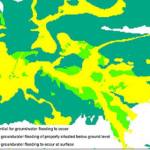 In response to the need for more information on groundwater flooding, BGS has produced the first national dataset on the susceptibility across Britain.