At around 22:30 on Monday 31 October 2011, a rock fall occurred on the sea cliff at the Porthkerry Leisure Park, a static caravan site near Barry, South Wales. It was reported by the BBC on Tuesday 1 November and in the local press and in the national press later the same week.

The rock fall occurred during heavy rain and close to the time of a high spring tide. It is estimated that around 15 000 m3 of rock (weight approx 34 000 tonnes) was involved in the fall. The event is part of the normal process of coastal erosion and should not be viewed as in any way unusual.

Risk to the public

It should be emphasised that further rock falls are possible and could pose a risk to the public. 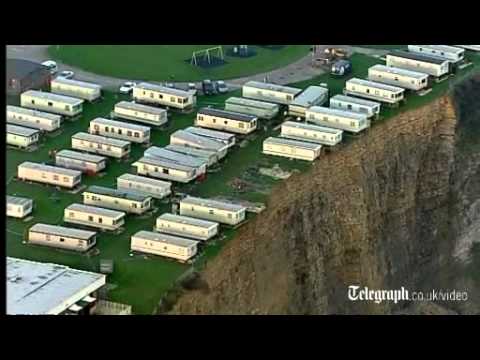 The cliff is in the Porthkerry Member of the Blue Lias Formation (Early Jurassic). This consists of a thick sequence of regularly bedded limestones and mudstones. The bedding and jointing that is a feature of this formation tends to produce a cuboidal (blocky) or tabular structure, resulting in little or no mass strength adjacent to the cliff face.

The rock fall was probably of toppling type; that is, a block became isolated from the cliff due to fissuring and fell forward onto the foreshore, breaking up in the process and forming a debris fan extending some 60–80 m across the beach and approximately 10 m up against the cliff face.

The caravan site owner, Sally Edwards, reported that, about two weeks before the event, fissures had appeared along the cliff top. Geotechnical engineers had been consulted and some of the caravans had been evacuated. Up to about 4 m of the cliff top was lost in the subsequent landslide.

Observations taken of the rock fall on the beach confirmed the interbedding of mudstones and limestones and the blocky form of the limestone boulders.

The cliff seemed to be saturated, with considerable groundwater seepage observed on the cliff face over much of its height.

A thick layer of mudstone is found about 2 m above the base of the cliff. A measurement of the strata immediately to the east of the rock fall showed a seaward (southward) dip of 3–4°. It is presumed that failure occurred in the mudstone, allowing the overlying strata to collapse downwards onto the beach.

Elaine Burt (BGS Cardiff geologist) commented that the common mode of failure in the Porthkerry Member is of vertical collapse, rather than a forwards topple.

Other, smaller rock falls were observed at a couple of locations a few hundred metres to the east of this event. According to a local resident, these had occurred 6 to 9 months previously.