Landslides and coastal erosion at Aldbrough, East Riding of Yorkshire

As part of the continued programme of work monitoring coastal erosion and landsliding at several sites around the coast of Great Britain, BGS is studying, monitoring and laser scanning the cliffs at Aldbrough in Yorkshire.

Aldbrough is located approximately 10 km south-east of Hornsea on the coast of the East Riding of Yorkshire. The cliffs here are rapidly eroding, so that Seaside Road now terminates at the cliff edge. Several buildings have been lost to the sea since 1885, including the Spa Inn, the Talbot Hotel and the Royal Hotel.

The glacial tills at Holderness are mostly late Devensian (18 000 to 13 000 years old) and probably represent the products of more than one glacial regime and till-forming process. The two major late Devensian till formations on the Holderness coast are the Skipsea Till and the overlying Withernsea Till. 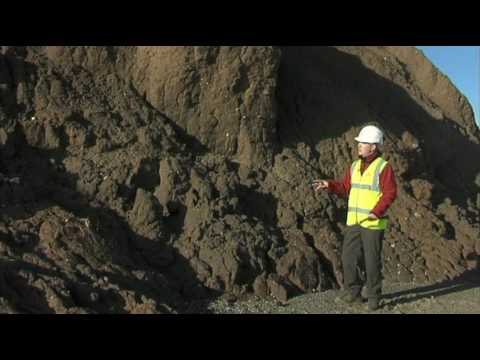 Video of the data collected in 2006 at Aldbrough.

The steep cliffs at Aldbrough face north-east and have a regular height of about 20 m. The cliffs are actively receding and the cliff profile is stepped due to the contrasting erosion resistances of the tills and the different landslide processes in the upper and lower parts of the cliff. At high tides the lower and, in some cases, middle sections of the cliff are subject to considerable erosion by wave action.

Historical annual recession rates for the caravan site at Aldbrough are reported as being 1.16 m for the period 1852 to 1951 using historical maps (Valentin, 1971) and 2.16 m for the period 1951 to 2004 using cliff surveys (East Riding Council). The coastal erosion and sediment yield of the Holderness coast have been estimated (Balson et al., 1998) using a digital terrain model for 50 km of coastline. They calculated that, using data going back to 1786, up to 2 million m³/year were removed from the cliff and up to 4 million m³/year from the cliff and shore face combined.

Active landsliding has been observed at the Aldbrough site. The principal mode is that of rotational slumping while the secondary modes are topples and falls. Toppling failures, though relatively small, are sudden and frequent, presenting a major hazard in this area.

Mudflows form a third minor mode. Given the morphology of the cliff and the strong action of the sea, these are small and short-lived.

We have been monitoring and modelling landslide activity at Aldbrough on the East Riding of Yorkshire coast since 2001.

Visit our observatory page to find out more.