A large landslide occured on the northern Cornwall coast on the afternoon of Friday 23 September 2011. Richard Hocking and Brian O’Connell, engineers at Cornwall Council, filmed the event, which was a large rock slide/fall near Hell’s Mouth, between Portreath and St Ives. A landslide on this scale is unusual in the south-west of England and the opportunity to witness it extremely rare.

The rock slide/fall appears to have developed progressively from the foot of the cliff and taken out a significant section of cliff top in about 20 seconds. However, tension cracks had been noted in the cliff-top three days previously by council engineers.

Geologically, the cliff consists of mudstones and sandstones of the Porthtowan Formation and slates/siltstones of the Mylor Slate Formation, both of Devonian age.

These rock materials are weathered and have variable strength. The rock material that failed, at least on the evidence of the video, appeared to be in a dry state.

There is a complex interrelationship of regional faulting and local jointing, which allows the rock mass to divide into blocks which with time become unstable. 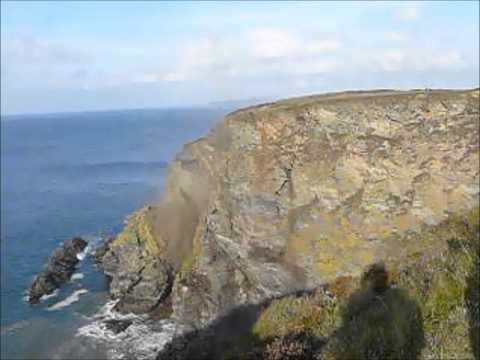 A large rock slide/fall near Hell’s Mouth between Portreath and St Ives, on the North Cornwall coast.

On 19 September 2011, a jogger had reported that a large crack had developed in the coastal path. Later that day, Cornwall Council decided to divert the path, working with the landowners The National Trust.

Further surveys by Cornwall Council on 22 September 2011 observed that the failure had progressed and that large tension cracks were opening up. On 23 September 2011, reports of material falling from the cliff were noted throughout the day. The cliff collapsed by about 4.50 p.m.