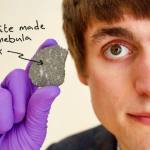 Tiny specs of space dust, billions of years old, are telling us important stories about our entire solar system, say scientists, who are discovering new ways to unearth clues about the birth of our planets.

The research, published in Science Advances, suggests that some of the dust – found in meteorites – can be dated from around 4.6 billion years ago, around the same time as our Sun became a star.

It is the first time that scientists have been able to show the age of this type of dust using a radioactive clock powered by the decay of aluminium-26; a radioactive isotope which can serve as naturally-occurring atomic clock, helping to date some of the earliest events in the solar system.

These discoveries are significant because they enable scientists to record the transformation of our solar system from a gassy disc into a planetary system.

Tim Gregory, a post-doctoral researcher at the University of Bristol has been researching meteorites for five years in collaboration with the British Geological Survey (BGS) and London’s Natural History Museum (NHM). He recently featured in BBC Four’s The Sky at Night.

“It’s fascinating that microscopic, 4.6-billion-year old meteorite dust can tell us so much about the formation of our entire planetary system,” he explains.

“Over 4.6-billion-years ago, our solar system existed as an interstellar cloud of swirling gas and dust called a nebula. In the space between the stars the nebula hung, but a small pocket of it began to collapse.

“As the nebula collapsed, it started to spin faster and faster, and eventually flattened out to form a disc orbiting a young star at the centre – our Sun. From the disc, dust began to form, which coalesced to form asteroids, comets, and, eventually, planets,” he says.

One of the only places this dust now survives is within meteorites which originate from asteroids that never melted. These meteorites are called chondrites; a collection of pieces of nebula dust which hold secrets about the earliest history of our solar system.

“Scientists can unpick the story of the newly-forming solar system by studying how old all of this dust is,” says Tim. “One of the ways we can do this is by using naturally-occurring atomic clocks; timepieces like the ‘aluminium-26 clock’.

“Aluminium-26 is radioactive and as time passes, it decays and transforms into a new ‘daughter isotope’ called magnesium-26, which has remained static ever since. By measuring the amount of excess magnesium-26 in a rock, we can see where it lies on the magnesium-26 growth curve and obtain an age,” he says.

Tim and his colleagues developed a new method for the study, involving an extraordinary three-year process and specialist technology, to acquire the data.

To understand how much magnesium-26 the olivine had when it formed, scientists needed to extract tiny crystals of olivine, not much bigger than the head of a pin.

“Olivine is chock-full of magnesium,” explains Tim. “When it formed, it ‘froze in’ its magnesium isotope composition because there was no aluminium to change it.

“The biggest challenge was measuring the magnesium precisely in such microscopic samples. Typically, we only had a few millionths of a gram to work with, but using some tricks and developing a new method, we made it possible.”

Using an electron probe and X-ray light, Tim was able to tease out the precise chemistry of the olivine. He first imaged, and then extracted the crystals with an electron microscope and a powerful laser to blast away the surrounding material. A high-precision drill was then used to extract the grains from the meteorites.

Once treated with a series of aggressive acids, the samples were purified, before being subjected to a flame that burns 2,000 degrees hotter than the surface of the Sun, called a plasma. The sample was funnelled into a mass spectrometer and measured.

“By looking at the precise blend of magnesium isotopes and placing this on a growth curve, what we found is that this type of dust started forming alongside the oldest solid bits of rock in the solar system – at least 4,567,000,000 years-old to be precise. This is the first time we’ve been able to show that this type of dust is this old using the aluminium-26 clock. It continued forming for about four million years.

“To put that into context,” Tim concludes, “if we shrank the solar system’s 4.567-billion-year history into a 24-hour day, it would be equivalent to the dust forming within the first one minute and 15 seconds. That’s the geological blink of an eye.”

Further research: Dr Tim Gregory is now undertaking research to date similar objects in meteorites using the “uranium clock”. He recently featured in the BBC Four’s The Sky at Night, a programme which takes audiences on a journey through the world of space and astronomy.

British Geological Survey: The British Geological Survey (BGS) is a world leading applied geoscience research centre that is part of UK Research and Innovation (UKRI) and affiliated to the Natural Environment Research Council (NERC). BGS works with more than 150 private sector organisations, has close links to 40 universities and sponsors about 100 PhD students each year. See www.bgs.ac.uk.