The directions of true, grid and magnetic north will, for the first time, coincide at various locations in Great Britain between 2022 and 2026. 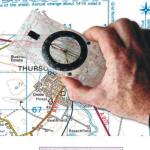 Between 2022 and 2026 it is predicted that, because of changes in the Earth’s magnetic field, the directions of the three norths will coincide at various locations at different times, for the first time ever. The locations of coincidence will run northwards along the 2°W longitude meridian, where the fixed directions of true north and British National Grid north are already the same.

The magnetic field varies with location and changes with time. Its direction in the horizontal plane is an essential directional reference for compass users. The changes are due to the slow movement of molten material in the Earth’s outer core region and these changes are also responsible for changes of the location of the magnetic north pole. Because the Earth’s magnetic field is more complicated than dipolar (i.e. like that of a bar magnet, which you can see with iron filings on a piece of paper) magnetic compasses do NOT point directly to the magnetic north pole. Compass needles instead align themselves with the local magnetic field.

There are 41 repeat stations spread throughout England, Scotland, Wales and the Isle of Man, each visited every four years, and three observatories, which operate continuously. At each repeat station site, the direction to true north is established using a pair of accurate Global Navigation Satellite System (GNSS) receivers. Readings are then taken over a few hours using a non-magnetic fluxgate theodolite to find the direction of the magnetic field. The strength of the magnetic field is also measured.

The data is reduced to quiet night-time levels using the continuous measurements from the observatories and then used to update a model of the UK magnetic field every year. This model provides the Ordnance Survey (OS) with north directions for their map products. In 2014, the OS had to design a new icon to represent the directions of the three norths because, for the first time ever, magnetic north became east of grid north for some locations in Great Britain.

The movement of the three norths

The 2021 revision of the model predicts that the direction of magnetic north will be the same as the direction of true north and grid north at the Isle of Purbeck/Poole in Dorset in November/December 2022. The point of coincidence of these three norths will then itself move northwards, passing Skipton in North Yorkshire in first half of 2024 and expected to reach Fraserburgh in Aberdeenshire some time in 2026. These later predictions will need refining nearer the time to account for any sudden and poorly understood changes in the magnetic field known as jerks or impulses.

You can calculate grid magnetic angle (the angle between grid north and magnetic north) for the current year by going to the BGS Geomagnetism website and using the GMA calculator. The calculator outputs a grid magnetic angle for any given location (entered as a British National Grid reference, latitude and longitude or postcode) from the current UK magnetic field model, which you can then use with a magnetic compass and map. 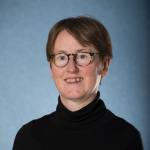