Hold onto your compass: true north and magnetic north cross at Greenwich for first time in 360 years 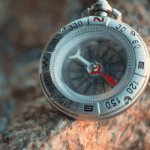 Compasses at Greenwich will point to true north for the first time in 360 years at some point within the next two weeks.

The angle a compass needle makes between true north and magnetic north is called declination. As the magnetic field changes all the time, so does declination at any given location. For the past few hundred years in the UK, declination has been negative, meaning that all compass needles have pointed west of true north.

The line of zero declination, called the agonic, is moving westward at a present rate of around 20 km per year. By September 2019, for the first time since around 1660, the compass needle will point directly to true north at Greenwich, London, before slowly turning eastwards.

The Royal Greenwich Observatory was established in 1676 and from 1836 the site hosted a specialised magnetic observatory. The observatory helped to establish the definition of zero longitude, paving the way for a global reference system for maps and navigation that we know today as the Greenwich Meridian and with it, Greenwich Mean Time (GMT). The instruments were moved in 1926 to Abinger, south of London, when the electrification of the railways eventually made it impossible to measure the magnetic field at Greenwich.

At some point in September, the agonic will meet zero longitude at Greenwich. This marks the first time since the observatory’s creation that the geographic and geomagnetic coordinate systems have coincided at this location.

The agonic will continue to pass across the UK over the next 15 to 20 years. By 2040, all compasses will probably point eastwards of true north.

It is, at present, impossible to predict how the magnetic field will change over decades to centuries, so the compass may well point east of true north for another 360 years in the UK.

BGS keeps track of the Earth’s magnetic field and uses data from observatories, satellites and stations around the world to monitor its slow changes. In the UK, the BGS operates three geomagnetic observatories — in Shetland, Dumfries and Hartland — and it operates another six worldwide.

The team stressed that zero declination at Greenwich won’t have any impact on day-to-day life.

Compasses and GPS will work as usual; there’s no need for anyone to worry about any disturbance to daily life.

The last time Greenwich had zero declination, King Charles II was on the throne.

By coincidence, it was Charles who established the Royal Observatory at Greenwich in 1675. Occasional measurements of the declination angle were made from 1680 onwards. In 1836, continuous measurements of the declination and inclination angles of the compass needle were started under the Astronomer Royal, George Airy. This continued until 1926 when the electrification of the railways finally made the site too magnetically ‘noisy’ to be scientifically useful and the observatory moved to Abinger. This paved the way for a standard global reference system for maps and navigation to be established, creating the Greenwich Meridian and with it, Greenwich Mean Time.

In 1884, the great circle line between the North Pole and the Airy Transit Circle at the observatory became the definition of ‘zero’ longitude by international agreement.

The British Geological Survey (BGS) is a world-leading applied geoscience research centre that is part of UK Research and Innovation (UKRI) and affiliated to the Natural Environment Research Council (NERC). BGS core science provides objective and authoritative geoscientific data, information and knowledge to inform UK Government on the opportunities and challenges of the subsurface. It undertakes national and public good research to understand earth and environmental processes in the UK and globally. The BGS annual budget of approximately £60 million pa is funded directly by UKRI, as well as research grants, government commissions and private sector contracts. Its 650 staff work across the UK with two main sites, the head office in Nottingham and Lyell Centre, a joint collaboration with Heriot Watt University in Edinburgh. The BGS works with more than 150 private sector organisations, has close links to 40 universities and sponsors about 100 PhD students each year. Please see https://www.bgs.ac.uk/.