During summer 2016 Laura Hubbard undertook a project looking at heavy metal and bacterial contamination of fish sold in the UK. 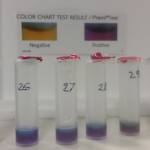 During summer 2016 Laura Hubbard, a student studying animal science with computer science at the University of Nottingham, undertook a project looking at heavy metal and bacterial contamination of fish sold in the UK, in collaboration with the inorganic geochemistry team at the BGS. We in the UK currently import 70 per cent of our seafood and it is important to monitor these products for harmful substances to find out what we are really eating. The main focus of the project was to compare imported, farmed fish from Asia with wild-caught and EU-farmed fish. We often see ‘horror stories’ in the news about food from abroad containing all sorts of scary things, but is there any truth to them?

What contaminants should we be worried about?

Although it is widely known that higher-trophic predatory fish such as tuna contain high levels of mercury (Hg), there has not been a lot of research into species lower down the food chain. As mercury is a potent neurotoxin it is important we do not consume too much. Mercury bioaccumulates in our tissues, causing damage to the central nervous system, especially in infants and unborn babies. Other heavy metals such as lead (Pb) and arsenic (As) are similarly poisonous, and the presence of these would be an indication of the quality of the environments the fish were farmed in.

The poorly regulated use of antibiotics in fish farming and their presence in the environment through waste from human activities is also a concern. This could drive antibiotic resistance in bacteria and result in antibiotic residues being present in food meant for human consumption; growing levels of antibiotic resistance pose a threat to global health. If any of the samples contain harmful bacteria there is a danger that they could cause illness when consumed.

Laura purchased an array of fish from supermarkets ranging from haddock to river cobbler. Back in the lab, after a lot of chopping, mashing, drying and grinding, she had reduced the fillets to fishy powders. (This was very smelly work and Laura was definitely not the most popular person around campus that week.) She then came to the direct mercury analyser at the BGS to quantify the amount of mercury present in each fish. The BGS team also carried out ICP-MS analysis to determine other elemental contaminants. Using molecular techniques, Laura identified which fish contained pathogenic bacterial DNA, and a simple validated test revealed if any of the fish contained antibiotic residues.

Laura did find fish on sale in the supermarkets that contained mercury levels above the UK legal limit, although the majority of the samples were below. Over half of the fish contained DNA from Salmonella species and two fish species contained Campylobacter DNA; both are associated with foodborne illnesses in consumers. The worst offenders were the farmed fish whilst wild-caught fish contained less bacterial contamination. All of the fish farmed in China tested positive for antibiotic residues — but so did all of the haddock, wild caught in the Atlantic Ocean.

Laura was given the opportunity to present her findings at the MSD Animal Health headquarters in Milton Keynes (who part-funded the work), along with student representatives from other UK veterinary schools. They fund projects at each of the UK veterinary schools every year and offer awards for the top three projects. Each student gave a presentation, and Laura was delighted to be given first plaice. (Sorry.)