Dick Merriman, former BGS geologist, recounts his experience 50 years ago as part of a team to land on Rockall, a small, uninhabited islet in the Atlantic Ocean. 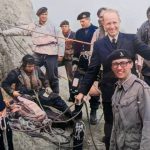 Dick Merriman is a former geologist at BGS geologist and retired from service in 2004. In 1971, he was chosen as part of a team to land on Rockall, a small, uninhabited islet and Site of Special Scientific Interest (SSSI). Today, on the fiftieth anniversary of the expedition, Dick recounts his experience.

It was a dream start to a career in geology. A year after graduating I was selected by my employer, the British Geological Survey (then the Institute of Geological Sciences), to join an expedition to land on Rockall in the summer of 1971. The lone rock, which is just over 70 feet high, is the only subaerial part of a submerged microcontinent, the Rockall Plateau, which underlies the north-east Atlantic Ocean. The purpose of the expedition was to attach a flashing navigation beacon to the rock, which is surrounded by several dangerous reefs.

With fellow geologist Dr Jan Hawkes, I was part of a team that included army engineers, two Royal Navy helicopters and Royal Marine climbing experts, all on board the RFA Engadine. Jan and I had both been on a rock climbing course with the Marines and were trained to land from a helicopter.

My first sighting of Rockall was a complete surprise. At a distance it looked like a ship in full sail, but as we got closer I could see it was a pointed dome, covered in white guano. The climbing experts were the first to land and attach safety ropes. We geologists were on the next helicopter on 9 June 1971 and joined  army engineers making a reconnaissance of the main landing place, Hall’s Ledge.

For the next 10 days Jan and I were on the rock for a few hours each day making a detailed map of variations in the unusual aegirine-riebeckite granite and taking samples for geochemical, petrological  and age-dating analyses. We also made magnetic and radiometric measurements and, in 1972, I drilled small rock cores for paleomagnetic studies.

Age dating of Rockall and its surrounding reefs produced some unexpected results. Rockall is around 53 million years old and was probably part of a Tertiary volcano, similar to those found in the Inner Hebrides and the Atlantic island of St Kilda.

Helen’s Reef is about 3.3 km east of Rockall and named after the brigantine Helen that struck the reef in 1824 with the loss of 16 lives. Divers from the Institute of Oceanographic Sciences sampled the reef on the 1972 expedition. To our great surprise, age dating showed that Helen’s Reef was a basaltic rock formed in the late Cretaceous around 81 million years ago, substantially earlier than Rockall. These ages were the first to indicate that the crustal rifting that formed the North Atlantic Ocean began earlier than was previously suspected and led to the detachment of the Rockall Plateau from north-west Europe.

Rockall had one more hidden surprise for the geologists. Some two years after the 1971 landing I was using X-ray diffraction (XRD) techniques to examine mineral residues separated from the granite. One unusual XRD pattern kept appearing but I could not match it with any naturally occurring minerals. My colleagues, who were experts in crystallography and electron microscope techniques, got to work and discovered it was a new mineral, a barium-zirconium-silicate. We named it bazirite and 50 years on it has yet to be found in any rocks other than the Rockall granite.

For more information about the 1971 expedition, please visit the publication record details for Expeditions to Rockall 1971–72.