The view down to the Acqua Vergine, a subsurface Roman aqueduct built in 19 BCE. © Tim Kearsey, BGS/UKRI

I recently attended the second bi-annual meeting of the Urban Geology Expert Group of EuroGeosurveys, which was hosted this year by the Italian Geological Survey in Rome. The group comprises 23 geological surveys from all over Europe, which collaborate and share experiences of urban geology.

As part of the trip, our hosts led us on a subterranean field trip of Rome. First, we were privileged to be given a tour of the new Metro C underground station, which sits directly below the historic centre of Rome, under the ruins of the Forum and the Colosseum.

Visitors today will notice that the southern half of the Colosseum is in much worse condition than the northern half. The damage was caused by a series of earthquakes in the 12th century. The southern half is built on poorly consolidated alluvial deposits, which amplified the seismic shockwaves and increasing the damage to the building on the southern side, leading to its collapse.

The Colosseum itself is a perfect example of the importance of urban geology. The builders of the new Metro line cannot allow any damage to any of the ancient structures, so they installed over 300 sensors, which feed back data about the monuments in real time. Using Lidar and many other monitoring devices, they have been able to safeguard these ancient sites from any damage during the construction and tunnelling underneath.

This highlights a problem which is very common to European urban geology: protecting ancient monuments and archaeology as we develop the urban subsurface.

Our next stop was to visit the Acqua Vergine, a subsurface Roman aqueduct built in 19 BCE, which still provides water for the fountains in Rome. The aqueduct highlights not only the amazing skill of the Roman engineers as it is completely driven by gravity, but also the fact that many cities still employ utilities that were built hundreds or even thousands of years ago.

Finally, we were taken down some Roman underground quarries. The rock under a large amount of Rome comes from two volcanic calderas: the Alban Hills, south-east of Rome, and the Sabatini volcanic complex, north-west of Rome. The most recent eruption from these volcanic systems was 36 000 years ago, although the Alban Hills are still considered to be dormant rather than extinct. During their eruptions, these volcanos covered most of the area where Rome was built in volcanic tuff, which now underlies most of the city. Tuff is lithified volcanic ash that, in this case, was deposited by pyroclastic flows originating from the volcanos.

The tuff has been extensively mined, by both the ancient Romans and later peoples, for building stone and aggregates, leaving large underground spaces. Some of these were re-used as catacombs, but  many were lost and became a subsidence risk for the buildings above. These spaces have now been mapped to help the city authorities determine the best course of action to prevent future overground collapses.

Rome highlights why urban geology is so important, especially in cities with ancient roots like most cities in Europe. As we try and decarbonise our cites and make them more resilient to climate change, we will increasingly have to utilise the urban subsurface. In older cities, this will require careful protection of heritage and a better understanding of lost underground spaces. 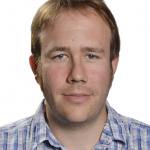 Tim Kearsey is an expert in 3D geological modelling and Carboniferous stratigraphy and sedimentology. He has developed ranges 3D geological models for Glasgow, Singapore to address problems from hydrogeology to geotechnical properties and geothermal energy.