BGS to monitor environment around proposed fracking site in Yorkshire 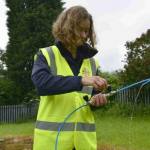 A British Geological Survey (BGS) led consortium will be carrying out an independent environmental baseline monitoring programme across the Vale of Pickering in Yorkshire. This is the area where Third Energy UK Gas Limited has submitted a planning application to hydraulically fracture one of its wells1. The consortium also includes Public Health England (PHE) and the universities of Birmingham, Bristol, Liverpool, Loughborough, Manchester and York (National Centre for Atmospheric Science).

The project, funded by a grant awarded by the Department of Energy and Climate Change (DECC), will build on the work currently being carried out in Lancashire where a baseline environmental monitoring programme was started at the beginning of 20152 around the two proposed Cuadrilla Resources Ltd shale gas exploration sites.

The monitoring in Yorkshire will include water quality (groundwater and surface water), seismicity, ground motion, air quality including radon, and soil gas. It will characterise the environmental baseline for each of these before any hydraulic fracturing and gas exploration or production takes place (in the event that planning permission is granted). The investigations will be independent of any monitoring carried out by the industry or the regulators and information collected from the programme will be made freely available to the public and also support peerreviewed science.

“It is now widely acknowledged that undertaking baseline monitoring before fracking takes place is essential. BGS has carried out national baseline monitoring of groundwater and seismicity for many years but now, in partnership with other experts, we will focus on specific areas of the country where hydraulic fracturing is being planned and to measure the baseline in far more detail than has been done before.”

Baseline characterisation was not undertaken during the early stages of unconventional oil and gas development in North America and recent scientific study has highlighted that a lack of effective environmental monitoring has led to considerable public concern and difficulty in differentiating between what are naturally high (baseline) concentrations of methane and other contaminants and the impacts that may be caused by oil and gas wells.

The importance of baseline monitoring in the UK has already been highlighted by the Lancashire work with detection of a small number of contaminants in shallow groundwater which exceed water quality standards. These are due to natural processes but we have also detected man-made organic substances such as pesticides and flame retardants which reflect impact from current and historical land use activities.

The project and its outcomes will:

The consortium research team will consist of the following lead scientists:

Photographs are available from our ftp server: ftp://ftp.bgs.ac.uk/pubload/bgspress/ShaleGasMonitoring

Free for media use with this acknowledgement: British Geological Survey ©NERC

The Natural Environment Research Council (NERC) is the UK’s main agency for funding and managing world-class research, training and knowledge exchange in the environmental sciences. It coordinates challenging research, tackling major issues such as climate change, food security, environmental influences on human health, the genetic make-up of life on earth, and much more. NERC receives around £300 million per year from the government’s Science Budget, which it uses to fund research and training in universities and its own research centres: www.nerc.ac.uk.

The University of Birmingham

The University of Bristol

The University of Bristol is one of the most popular and successful universities in the UK, and was ranked within the top 30 universities in the world in the QS World University rankings 2013. Bristol is a member of the Russell Group of UK research-intensive universities, and a member of the Worldwide Universities Network, a grouping of research-led institutions of international standing. The University was founded in 1876 and was granted its Royal Charter in 1909. It was the first university in England to admit women on the same basis as men. The University is a major force in the economic, social and cultural life of Bristol and the region, but is also a significant player on the world stage. It has over 15,000 undergraduates and nearly 6,000 postgraduate students from more than 100 countries. Its research links span the globe. Eleven Bristol graduates and members of staff have been awarded Nobel Prizes, including Sir Winston Churchill, who was Chancellor of the University of Bristol from 1929 until 1965.

The University of Manchester, a member of the prestigious Russell Group of British universities, is the largest and most popular university in the UK. It has 20 academic schools and hundreds of specialist research groups undertaking pioneering multi-disciplinary teaching and research of worldwide significance. The University of Manchester is one of the country’s major research institutions, rated fifth in the UK in terms of ‘research power’ (REF 2014), and has had no fewer than 25 Nobel laureates either work or study there. The University had an annual income of £886 million in 2013/14. www.manchester.ac.uk

Loughborough is one of the country’s leading universities, with an international reputation for research that matters, excellence in teaching, strong links with industry, and unrivalled achievement in sport and its underpinning academic disciplines. It has been awarded five stars in the independent QS Stars university rating scheme, putting it among the best universities in the world, and is consistently ranked in the top twenty of UK universities in the Times Higher Education’s ‘table of tables’. In recognition of its contribution to the sector, Loughborough has been awarded seven Queen’s Anniversary Prizes. In 2015 the University will open an additional academic campus – Loughborough University in London – on the Queen Elizabeth Olympic Park, offering postgraduate education, as well as research and enterprise opportunities.

The University of Liverpool is one of the UK’s leading research institutions with an annual turnover of £400 million, including £78 million for research. Liverpool is ranked in the top 1% of higher education institutions worldwide and is a member of the Russell Group. Visit www.liv.ac.uk or follow us on twitter at: http://www.twitter.com/livuninews

The University of York is one of the world’s leading universities, carving out a reputation as an academic powerhouse where a clear focus on excellence has secured national and international recognition alongside longer established institutions. As a member of the elite Russell Group of universities, it is a dynamic, research-intensive university committed to the development of life-saving discoveries and new technologies to tackle some of the most pressing global challenges. It has over 30 academic departments and research centres and the student body has expanded to nearly 16,000.

Public Health England (PHE) was established on April 1 2013 to bring together public health specialists from more than 70 organisations, including the former Health Protection Agency (HPA), into a single public health service. PHE (and its predecessor organisation) has a long history of radon measurement. It is the UK’s primary expert on radiation protection and represents a significant nationwide resource for the public, industry, education, research and medicine and is the Government agency for advice about radon in the UK. A specific function of PHE is to carry out research and measurement to advance knowledge about protection from the risks of radon; provide laboratory and technical services; run training courses; provide expert information; and fulfil a significant advisory role to regulators, government, the public and others. https://www.gov.uk/government/organisations/public-health-england/about