The BGS aims to make available information about underground mining records, drawing together a range of mine plans from a variety of sources including the Health and Safety Executive mine abandonment plans, published mine plans and plans of mine workings. This is not a comprehensive catalogue, but represents the information currently available in our database for non-coal mine plans. (For details of coal workings contact The Coal Authority.)

Our collection of non-coal mine plans is ongoing and updates are carried out intermittently. Search our database to find out where records are held. A limited number of the plans have been spatially located and can be identified via a spatial or map-based search, which opens in a new window.

Mining has occurred in Great Britain since approximately 2700 BCE. A diverse range of minerals has been extracted by underground mining, from industrial minerals such as limestone to precious metals like gold. Plans, sections and shaft information exist, recording many of these workings. However, with the exception of coal mining, there has been no coordinated effort to catalogue and create a national database of these records. A variety of collections, catalogues and indexes exist in disparate public and private hands but individually, these cover only parts of the total holding (thought to be in excess of 40 000 documents).

Maps and plans are prepared for a particular purpose and only represent a snapshot at a point in time. For instance, topographical maps such as those produced by the Ordnance Survey are intended to show surface features such as buildings, roads, field boundaries etc. as they stand at the time the survey was made and in as much or as little detail as the scale of the map will allow. Such maps often resort to the use of symbols to identify named features where it is not possible to accurately represent the feature by other means.

Prior to 1840, there was no requirement for mining plans to be prepared and it was not until 1850 that the Inspection of Coal Mines Act 1850 required a coal mine owner to keep a plan at each mine.

In 1872, the Coal Mines Regulation Act and the Metalliferous Mines Regulation Act made the deposition of plans of abandoned mines with the Secretary of State a statutory requirement. Non-coal mines were not required to deposit plans if there had been less than 12 men employed below ground and this relaxation was perpetuated in all subsequent legislation until 1993. All that was required to be shown on these plans were the boundaries of the mine workings up to the time of abandonment. There was no requirement for orientation with the surface, depth of workings or section extracted information to be shown.

Gaps in our knowledge

It is unfortunate that many thousands of workings had been abandoned by the time this legislation was introduced and the knowledge and understanding of those unrecorded workings were, in many cases, lost forever. It is also worth noting that the earlier mine plans would have been produced using simple surveying equipment, which did not give the accuracy expected in mine plans of today.

Many records relating to mining, particularly that which occurred prior to 1872, are likely to be incomplete and unreliable. Users should always seek professional advice from a suitably qualified mining surveyor or engineer before relying on the information contained within the records.

The voids caused by underground mining activity may pose a potential hazard to both life and assets, and the risk of ground movement can reduce property values. Mineral workings and associated spoil can frequently cause a pollution hazard.

Mining records can provide important cultural information on the distribution and past extraction of mineral resources and are a key source of information for geological surveying and scientific research. However, safety, the risk to health, the physical threat to property and the real or perceived impact on property values are the most compelling reasons for action to establish a coherent national database of non-coal mine plans.

The mining plans portal was established in 2002 as a result of a partnership between a group of public bodies including the Health and Safety Executive, the Coal Authority, the BGS, the National Archives, the Mineral Valuer (part of the Valuation Office) and the Camborne School of Mines, who agreed to work together to create a national database of non-coal mine plans. The consortium agreed the following:

Whilst this partnership no longer exists, BGS and the Coal Authority have continued to work together to make information about the extent of historic underground mining of non-coal minerals in Britain more accessible.

The website includes plans for Great Britain and, where available, the Isle of Man. The Geological Survey of Northern Ireland (GSNI) holds a comprehensive collection of Northern Irish mine plans accessible via the GSNI GeoIndex.

There are plans in our database that are not shown or are poorly located on the map because we do not know their exact location in Great Britain. This means that we have plans that show up in the database search but not the map search.

Please help us improve the map search. If you have mine plans or related information that you are willing to allow us to add to our database, or if you wish to report errors, please contact us.

We also welcome information that allows us to provide more accurate information on unlocated or poorly located plans. If you have such information please contact us.

Open access to a number of our digital scan collections, including borehole log scans and published maps. 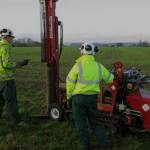