The geochemical analyses presented in the original atlas were for a series of 17 elements.

The advanced atlas presents analyses and maps for a total of 53 elements, which includes the original 17 elements.

The data have already been used to estimate the total quantity of inorganic carbon in the soils of part of England (download the case study).

This e-book publication is the outcome of collaborative research between the BGS and Rothamsted Research.

The analyses presented in this atlas were funded from the NERC core grant provided to the British Geological Survey.

Data availability: The data for each of the elements in the Advanced Geochemical Atlas of England and Wales can be downloaded as a set of interpolated concentrations 20.5MB zip on a one kilometre grid across England and Wales. The data is made available in British National Grid. The concentration units for these grids are the same as shown in the Atlas. These data are made available under the Open Government Licence, subject to the following acknowledgement accompanying the reproduced BGS materials: “Contains British Geological Survey materials © UKRI [year]”.

The data are also made available as WMS services.

Comments or queries regarding the e-book can be sent to enquiries@bgs.ac.uk 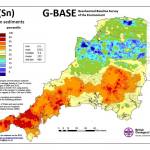 G-BASE is a major BGS project that surveyed the surface geochemistry of the entire UK. Soil and stream-sediment geochemistry data is available for south-west England as a standalone dataset. 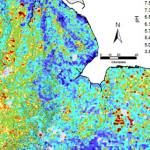 Systematic geochemical sampling and analysis of rural stream sediment, stream water and soil samples was carried out across the UK by the BGS and GSNI. 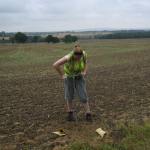 The BGS Geochemical Baseline Survey of the Environment (G-BASE) is the national strategic geochemical mapping programme in Great Britain. 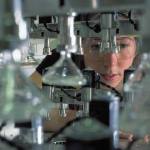