The last volcanic eruption on the Reykjanes peninsula, near the Icelandic capital of Reykjavik, took place in the 12th century, so there was much excitement when, after three weeks of precursor earthquakes, lava stated to flow from the Fargradalsfjall volcano on 19 March 2021. Having spent part of my childhood in Iceland, I was really keen to see the eruption and, once COVID-19 restrictions and work commitments allowed, I flew out to Iceland with my wife in late July 2021.

The volcano lies on the North Atlantic Ridge, which is the boundary between the Eurasian and North American oceanic plates. The plates are moving apart at an average rate of about 20 mm a year. As the stress builds, it allows the intrusion of magma into fractures and, if the magma reaches the surface, a volcanic eruption. In this area, eruptions tend to be rather gentle and dominated by basaltic magma, which flows over he surface, rather than by explosive events that produce ash.

In the initial days after the eruption started, visitors could approach relatively close to the erupting crater, but as lava began to spread out, it progressively cut off the paths and pushed potential viewing points back.

When we arrived in Iceland the weather was challenging, with fog, heavy rain and strong winds. Nevertheless, a chance to see an active volcano is one few geologists would pass up, so we donned our hiking gear and walked up to the best viewing point — where we saw fog and heavy rain! But in moments when the wind dropped we could hear and almost feel explosions from the crater.  On the point of heading down the mountain, we met a group of hikers who told us that there was glowing lava visible 45 minutes further along the mountain ridge, so we pressed on and sure enough, we began to see glowing red lava dimly through the fog.

Another half-hour walk along the edge of the recent lava flow made the effort worthwhile – we reached a spot where fresh lava was flowing. With the steam generated from rain falling on hot rock adding to the fog, it was an amazing sight. Even from a safe distance we could feel the heat generated and it was mesmerising to watch the slow advance of the lava. At this point, it was flowing over gentle slopes and forming pahoehoe lava, which has a smooth, ropy surface as it cools. Other parts of the lava field, with steeper slopes, have formed a’a lava, with a rough and jagged appearance. As the rainfall intensified we had to head back down the mountain, but with a great sense of satisfaction.

We managed to climb to a viewing point on a fine, sunny day a week after our first visit. The view of fresh lava spread around the crater was spectacular, but while we watched there was no activity. It actually started fountaining lava about three hours after we had descended, but the consolation was that by that time the fog and rain had returned, so we wouldn’t have seen anything!

This eruption is distinctive in that the lava is flowing from about 16 km below the surface, at the edge of the mantle; most Icelandic volcanoes have magma sources nearer the surface. Geologists speculate that this might mean the eruptive activity could to continue for several years, a pattern that was seen in the previous episode in the 12th century. At the time of writing (August 2021) the volcano has bursts of activity lasting several hours, followed by up to a day when there is little visible sign of movement.

Information about earthquake and volcanic activity in Iceland is available on the website of the Icelandic Meteorological Office. 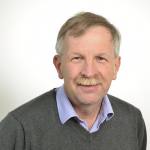