Bivalves have inhabited the Earth for over 500 million years. They first appeared in the midddle Cambrian, about 300 million years before the dinosaurs. They flourished in the Mesozoic and Cenozoic eras and they abound in modern seas and oceans; their shells litter beaches across the globe. Some also occur in lakes and rivers. Fossil bivalves were formed when the sediments in which they were buried hardened into rock. Many closely resemble living forms, which helps us to understand how they must have lived.

Bivalves, which belong to the phylum Mollusca and the class Bivalvia, have two hard, usually bowl-shaped, shells (called valves) enclosing the soft body. The valves are the parts usually found as fossils, but decay of the elastic hinge tissue that joins them means that they are rarely preserved together.

Bivalve shells may be elongate, round or highly irregular in shape. The valves are often mirror images, e.g. Laevitrigonia, but each can have a different shape, e.g. Volviceramus. Patterns of concentric and/or radial ribbing add strength and provide anchorage in sediment.

The valves consist of layers of crystals of the minerals calcite or aragonite. Particular strengths conferred by different crystal layer arrangements help bivalves adapt to a variety of environments. A hinge, formed by the interlocking of rows of projecting nodes (teeth) and notches (sockets) along one of the inside edges of each valve, guide the opening and closing of the valves.

The most important functions of fossil bivalve shells were to protect against predators and prevent dehydration in intertidal environments. The inside surface of a bivalve shell is marked by the attachment areas of the muscles and ligament responsible for opening and closing the valves. These features, with the teeth and sockets of the hinge, are important for classification.

Bivalves are vulnerable to attack from gastropods, crustaceans, starfish, fish and birds.

Large, thick shells and spines protect some, while others hide themselves by burrowing into the sea bed using an extendable muscular ‘foot’. Insoluble layers in some bivalve shells resist the chemical attack of shell-boring gastropods. 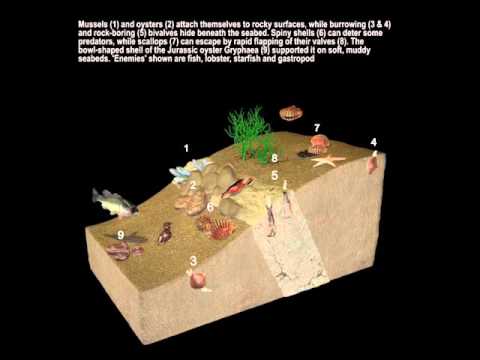 Bivalve environments and enemies: an artist’s impression of a seascape showing the different modes of life of modern and fossil marine bivalves. Mussels (1) and oysters (2) attach themselves to rocky surfaces, while burrowing (3 and 4) and rock-boring (5) bivalves hide beneath the seabed. Spiny shells (6) can deter some predators, while scallops (7) can escape by rapid flapping of their valves (8). The bowl-shaped shell of the Jurassic oyster Gryphaea (9) supported it on soft, muddy sea beds. ‘Enemies’ shown are fish, lobster, starfish and gastropod. BGS © UKRI.

Most bivalves live by filtering waterborne food particles, although some extract nutrients directly from the sediment.

In the Mesozoic Era, the evolution of extendable tubes of soft tissue (siphons) enabled bivalves to burrow more deeply whilst keeping their food supply accessible. A special embayment of the inner shell margin (pallial sinus) allowed storage of the siphons when danger threatened.

Different modes of life are reflected by the shape of the bivalve shell. Streamlined burrowing forms contrast with the irregular form of oysters, e.g. Deltoideum that reflect the irregular surfaces they encrust. The bowl-shaped Gryphaea is adapted to resting on soft, fine-grained sediment, while Teredo and Penitella used their abrasive shell ornaments to bore respectively into wood and soft rocks. The rapid flapping of the fan-like shells of fossil scallops, e.g. Pecten, propelled them through the water to escape predators or to find new food.

Bivalves can be used to show if the rocks in which they occur were formed in a marine, brackish or freshwater environment. For example, abundant fossil oysters might suggest deposition in shallow water or proximity to ancient shorelines.

Sometimes, bivalves are a useful guide to the age of the rocks in which they occur. This is the case in the coal-bearing rocks of the Late Carboniferous in which Carbonicola has been used to identify and correlate individual coal seams. The strata of the Late Cretaceous Chalk Group, forming the famous White Cliffs of Dover, are rich in the remains of inoceramid bivalves. They have been used to refine the established Chalk biostratigraphy and so aid correlation.

The strong influence of environmental factors on bivalve distribution coupled with rather slow rates of evolution limits their widespread use for biostratigraphy. Even in the rather uniform environment of the Chalk, some groups display faunal provincialism.

The strongly recurved form of some Gryphaea is popularly known as the devil’s toenail. Some 17th and 18th century Scottish accounts show that its possession was believed to cure arthritis.