A volcanic hazard refers to any potentially dangerous volcanic process that puts human lives, livelihoods or infrastructure at risk of harm. Several hazards may affect the area around the volcano, such as lava flows, pyroclastic flows, lahars, jökulhlaups and landslides or debris avalanches. Volcanic activity also produces hazards that can affect areas far from the volcano, such as tephra or ash falls, releases of gas and tsunamis. Such hazards can impact areas hundreds or thousands of kilometres from the volcano, with the potential for significant health and economic impacts (BGS, 2012).

Even though volcanoes can be dangerous, there are lots of reasons why people live alongside them. There can be emotional, societal and economic benefits. For those living alongside volcanoes, knowing about volcanic hazards is just one way that people can reduce their risk.

Volcanic products are typically named according to clast (particle) size, which can range from metres down to microns in size. ‘Tephra’ is used as the catch-all term to describe all erupted clasts regardless of size, while the term ‘ash’ describes particles of less than 2 mm in size. 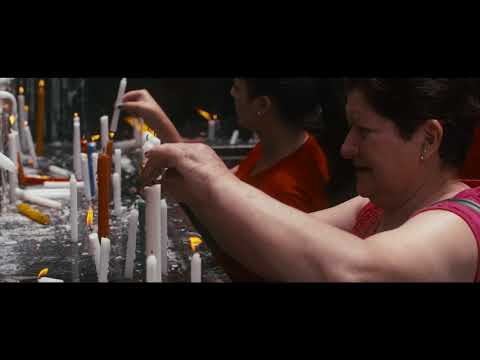 During an eruption, most tephra will fall to the ground around the volcano. This can load buildings’ roofs and obscure road markings, making travel difficult. The loading of tephra on leaves can lead to the burial of plants or the stripping of branches from trees, resulting in a significant impact on agriculture.

The fine-grained nature of volcanic ash means it is easily transported by winds to distance of hundreds to thousands of kilometres away from the volcano. It may also be sent up high into the air, sometimes reaching the stratosphere. Ash is made up of small, sharp, angular fragments of glass and other volcanic rock; due to its abrasive nature, volcanic ash can cause damage to aircraft.

One explanation for the ‘blood red’ clouds at sunset depicted by Edvard Munch in the painting ‘The Scream’ is the volcanic eruption of Krakatau in 1883. The eruption emitted large amounts of gas and ash that changed the colour of the sky worldwide.

Various gases can be emitted by active volcanoes before, during or after an eruptive event and can cause various health hazards locally, but also have the potential to affect the climate globally. The five main gases that pose a threat to health are:

People can be exposed to harmful volcanic gases by breathing them in or through contact with the skin and eyes. The health effects range from mild to serious, with occasional deadly exposures. After exposure, people may report difficulty breathing and itchy skin. 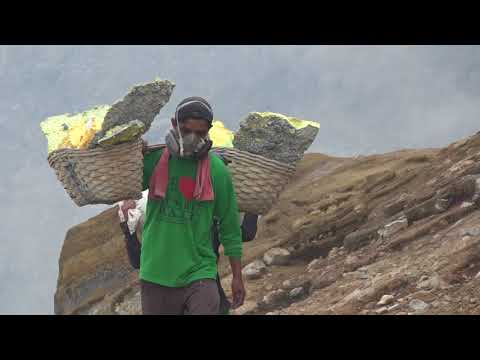 Volcanic gases are particularly hazardous as they cannot be seen and, because they are denser than ambient air, can ‘pond’ in depressions around an active volcano. High concentrations of volcanic gas may also be a health hazard inside planes. Sulphur gases convert to sulphate aerosols (mainly sulphuric acid) which, if they reach the stratosphere, may remain there for years, causing short-term climate changes.

Lava flows are flows of magma extruded onto the surface of a volcano. In general, it is rare for lava to cause the direct loss of life, because it usually flows slowly, allowing sufficient time for people to be evacuated. It does, however, destroy everything in its path by a combination of burial, crushing and heat. Such eruptions are also associated with emission of volcanic gases and aerosols. 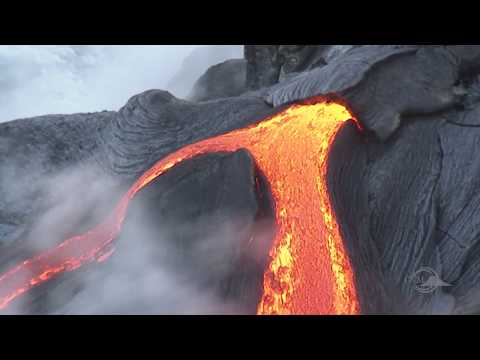 The viscosity — how easily a fluid can flow — of lava flows generally increases with silica content and decreases with a rise in temperature and water content. Low-viscosity, iron/magnesium-rich basalts are the most fluid of the common lava types and are typically erupted at temperatures of 1100–1200°C. They can flow relatively long distances. High-viscosity, silicon-rich andesites are much less fluid than basalt and are erupted at temperatures of around 700–900°C. They form short, thick flows or steep-sided lava domes that don’t travel far from volcanic vents. The rate of movement of lavas typically ranges from a few metres per hour for high-silica, andesitic lavas to several kilometres per hour for fluid basalts.

Lava domes form when high-viscosity lava is slowly erupted from a volcano. Because of the high viscosity of the lava, it cannot travel far from the vent and a dome of lava builds up. These lava domes are particularly hazardous as they tend to be unstable and can collapse, causing pyroclastic density currents.

Flood basalts are an exceptional form of lava flow. These eruptions are rare and our understanding of these events is based on study of past eruptions at places like the Deccan Traps in India, or the Siberian Traps. Such eruptions impact large, up to continental-sized areas (over one million square kilometres), They can have thicknesses up to a kilometre and release large amounts of gas; they can cause air pollution and even have an impact on the global climate.

We can learn a lot from flood basalts that happen in Iceland. In 2014, the Holuhraun fissure eruption reached flood basalt size. It is now the largest flood basalt in Iceland since the Laki eruption in 1783–1784, which caused the deaths of about 20 per cent of the Icelandic population by environmental pollution and famine. It most likely also increased levels of mortality elsewhere in Europe, through air pollution by sulphur-bearing gas and aerosols. Thankfully, flood basalt eruptions are very rare!

Pyroclastic flows are hot ‘density currents’ consisting of mixtures of rock debris and gas that flow along the ground at high speed. Travelling under gravity, they tend to flow down hillsides, along valleys and towards lower ground, although extremely powerful, or energetic, pyroclastic flows have been known to defy gravity and move uphill. Temperatures of pyroclastic flows can range between 100°C and 600°C. They typically travel at 110 kilometres per hour or faster down the sides of the volcano. 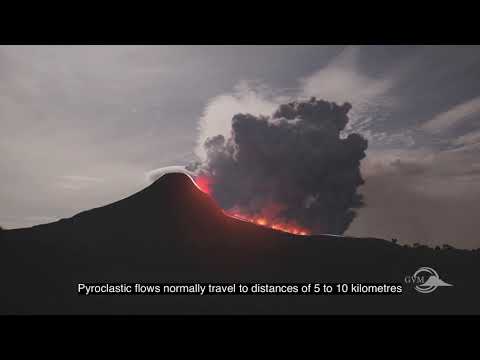 Pyroclastic flows can occur during explosive eruptive activity, where the mixture of gas and ash emitted from the volcano is too dense to rise buoyantly into the atmosphere, Instead, it collapses around the volcano.

Volcanoes that erupt very viscous lavas that form domes can also produce pyroclastic flows if the dome becomes unstable. Pyroclastic flows are produced when large portions of the dome collapse and disintegrate.

Pyroclastic flows produce deposits of hot ash and rocks around the flanks of the volcano. Temperatures may exceed 400°C in material that is several months old. These pictures show typical deposits from dome collapse and fountain collapse pyroclastic flows.

Debris avalanches and landslides are common, but are not necessarily caused by an actual volcanic eruption or volcanic activity. They can be triggered as the result of a volcanic explosion or dome collapse, particularly in environments where heavy rainfall is common. Debris avalanches tend to become channelled into valleys and can travel large distances well beyond their source areas. It is difficult to reduce the impact of debris avalanches because they can occur without warning, even on dormant volcanoes, and can devastate large areas. Once initiated, it is almost impossible to evacuate areas in the paths of debris avalanches because of the great speed with which they travel.

Lahar is a Javanese word for a type of volcanic mudflow made up of volcanic debris and hot or cold water. Lahars move at speeds that range from less than 10 kph up to tens of kilometres per hour. They can occur as a result of eruptions involving ice or snow, which can generate large amounts of meltwater, or they can be triggered, or mobilised, by heavy rainfall. As these debris-laden flows move down river valleys, they can gather more and more loose material.

Viscous mudflows may contain more than 60 per cent sediment (40 per cent water) and have the consistency of wet concrete. Less viscous mudflows, with a higher water content, resemble torrential floods. 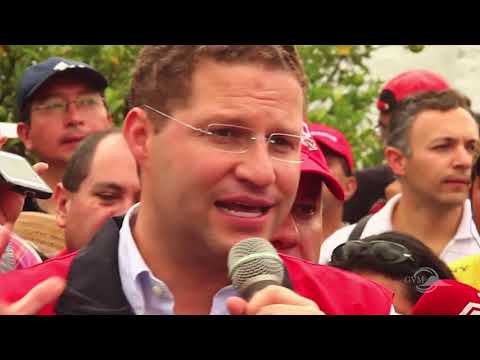 Lahars have been a major cause of fatalities in historic times. For example, in 1985, 23 000 people died as a result of a lahar on the Nevado del Ruiz volcano in Colombia, the deadliest lahar event in recorded history. Fatalities and injuries from lahars can be avoided if communities are evacuated quickly to high ground.

Jökulhlaup is an Icelandic word that is used to describe a glacial outburst flood, a sudden release of water from a lake that lies under or close to a glacier. One of the triggers of a jökulhlaup could be the eruption of a volcano ­situated beneath a glacier that melts overlying ice or weakens a dam made of glacial moraine sediments. The sudden removal of the lake dam releases a huge volume of water to produce a ‘megaflood’ that can wash away roads and bridges.

The Japanese word tsunami means ‘harbour wave’. Tsunamis can form in relation to a wide range of geological activities, from earthquakes to landslides. Although less common, volcanoes can also cause tsunamis. In fact, tsunamis have caused the most fatalities associated with volcanic eruptions in historical times.

Tsunamis form when water, whether in a lake of the sea, is displaced. On volcanoes, this can occur via a number of mechanisms, for example:

An example of such an event is the 1883 eruption of Krakatau, Indonesia. While there is still some discussion as to the exact source of the tsunamis, the eruption produced large pyroclastic flows and led to collapse of the volcano. Numerous tsunamis were produced, with the most devastating resulting in more than 36 000 deaths. More recently, in 2018, another tsunami formed in relation to activity at the same volcanic complex. Anak Krakatau, ‘child of Krakatau’, is the volcano that has built up over the past 100 years on the edge of the 1883 Krakatau caldera. In December 2018, approximately half of the volcano collapsed into the surrounding seas, forming a tsunami that affected much of the coast along the Sunda Straits and causing the deaths of more than 400 people. 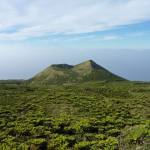 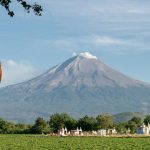