Potentially harmful chemical elements (PHEs), including arsenic (As), cadmium (Cd), chromium (Cr), nickel (Ni) and lead (Pb), occur in the environment and, under certain circumstances, can be harmful to plants, animals or people.

Whether or not a particular PHE constitutes a hazard depends on a variety of factors including:

Some PHEs are widely distributed in natural (uncontaminated) soils as well as in a range of anthropogenic sources. PHEs exist in a range of inorganic forms that have varying toxicity.

What is the source of the data?

The urban soil chemistry data is derived from the results of soil geochemical surveys undertaken by the BGS. Nineteen of the surveys were undertaken as part of the G-BASE project, whereas Wolverhampton, Manchester and Glasgow were sampled as part of larger multidisciplinary projects and Greater London as part of the London Earth project.

Anyone with a requirement to:

How does this data relate Defra’s normal background concentrations?

Defra commissioned the BGS (October 2011 to March 2012) to give guidance on what are normal levels of contaminants in English soils in support of the revision of the Part 2A Contaminated Land Statutory Guidance. The BGS soil chemistry for environmental assessments can be used to assess whether concentrations of elements at a site fall within the ‘normal’ level as defined in this guidance. ‘Normal levels’ for As, Cd, Ni and Pb in English soils are published in the technical guidance sheets and supplementary information.

‘Normal background concentration’ (NBC) is a term used to describe contaminant concentrations when they are seen as typical and encompasses contributions both from geogenic sources and diffuse anthropogenic pollution. NBCs should not be considered to cause land to qualify as contaminated land unless there is a particular reason to consider otherwise.

The main exposure pathway for PHEs, including As and Pb in soil, is via soil ingestion by people, therefore, from a human health perspective, it is not the total amount of As or Pb in the soil but the fraction that is absorbed into the body during soil ingestion, i.e. the bioavailable fraction, that is important for assessing human health risk.

Have the datasets changed their name?

Yes. We have re-named our soil chemistry datasets thus: 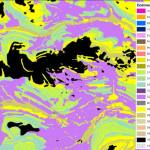 The Soil Parent Material Model details the distribution of properties of the weathered and unweathered soil parent materials of the UK.