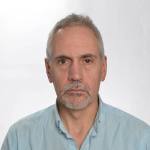 I have more than 40 years experience with Managing and collecting samples, mainly but not exclusively offshore, where I have taken part in sea bed sampling and shallow borehole drilling project for the BGS offshore mapping programme of the UK Continental Shelf.

I have also been involved in a number of commercial projects drilling in the North Sea, north Atlantic Ocean and the Indian Ocean and scientific projects from the North Pole to Antarctica. I am a drilling co-ordinator in ESO, the European arm of the International Ocean Discovery Program (IODP), completing expeditions around the globe.

Onshore, I have supervised percussion drilling contracts and carried out our own drilling using a hand portable rig I helped design.

Prior to their relocation to Keyworth in 2012, I managed the BGS Scottish Borehole Collection, the Offshore sample archive and the UKCS hydrocarbon core. I formulated a plan and managed a team over 20 months to photograph and relocate the UKCS samples comprising over 175,000 boxes of core and cuttings from Edinburgh to Keyworth.

In addition to these we also relocated almost 30,000 boxes of collected by BGS during our Offshore Regional Mapping programme. In 2015/16, the experience gained was used to managed a team to relocate the remaining samples held in our Edinburgh office to our new office at the Lyell Centre. These 15,000 trays were scanned for radioactivity, given a condition survey, weighed and databased to produce a full inventory of our holdings, including where they are located in the new stores.

I now have a management role in the NGR working with the staff based in Edinburgh and Keyworth who curate, database and make available the samples and specimens we hold.