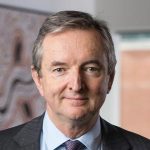 Simon has a MA (Geology) from University College, Oxford and a PhD (History) from King’s College London.

After working for N M Rothschild and S. G. Warburg, Simon joined the Anglo American group, holding a number of senior positions including CEO of the Base Metals Division, Chairman of the Exploration Division and Chairman of the Tarmac Group. He was appointed an Executive Director in 2005.